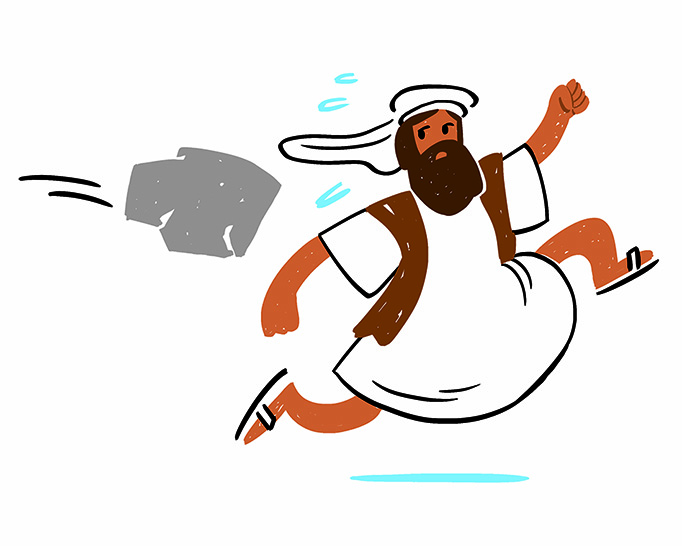 This is the first installment of a year-long endeavor wherein, week-by-week, we will summarize the Bible story being shared at synagogue so that you can enjoy the story and skip the synagogue.

The Hebrews were wandering through the desert, and God decided to start throwing some commandments at them.

Father: My son’s an alcoholic.
God: Well, only one way to fix that. Stone therapy.
Father: What’s that?
God: It’s when you stone him to death.
Father: What you do when a wife cheats on her husband?
God: Stone therapy.
Moses: I’m sensing a pattern here.
God: You know what fixes unmarried girls who have sex?
Moses: Stone therapy?
God: Wait for me to say it.
Moses: You’re really getting into stone therapy lately, huh?
God: I’m bored of reading hieroglyphics, and I’ve gotta wait like a thousand years before the Romans invent gladiators.

Miriam’s Ghost: What if a guy rapes a girl? Stone therapy? #WomenAreInTheBibleTooKindOf
God: Nah, just make the rapist marry her.

Everyone stares horrified at God.

God: I’m kidding! I’m totally kidding. Jesus Christ, that would be terrible. Don’t actually write that one down.
Moses: What? Sorry, I wasn’t listening, I got distracted thinking about water. Not a lot of water in the desert, I noticed.
Miriam’s Ghost: Have you thought about coming out with a women’s edition of this Bible?
God: Obviously I have not. Oh wait, here’s a thing for you though. If your husband dies, you marry his brother. And if his brother won’t marry you, steal his shoes, and spit in his face.
Miriam’s Ghost: That last part sounds fun, but what if the girl doesn’t want to marry him?
God: I have not considered that possibility. Also, don’t grab a guy’s junk in a fight. Not cool.
Miriam’s Ghost: The rules are starting to seem a little all over the place. Have you considered introducing categories?
God: I have not.
Miriam’s Ghost: You’re all powerful. Why do you care about any of this?
God: Imagine that you invented the universe. You know literally everything about it. Everything that has ever happened and will happen. You can’t ever experience anything new. And on top of that, you have no one to hang out with, since all your creations are just dumb stick figures you invented. You get really bored and start messing around. It’s like when you torture your Sims.
Miriam’s Ghost: What are Sims?
God: That reference was actually for future people.
Miriam’s Ghost: Rude.

God strikes her with lightning.

Moses: My apologies, great and mighty lord, were there any other rules you wanted us to know? Some more awkward sex stuff, perhaps?
God: Ummmm. Oh yeah! Okay, so if a guy has a wet dream, he has to leave town, take a bath, and come back at night. Or at least take a shower or something. Seriously.

The guys all grumble.

God: Geez, fine. I’ve got some boring, good commandments too. First off, don’t muzzle your animals. And actually, as a general rule, don’t be dicks to animals. I’m not consistent about everything, but I’m pretty solid on that. You can eat them, and you can sacrifice them, but you can’t be jerks to them while they’re alive.
Factory Farms: *blink*
God: Also, never punish a child for someone his parents did, or vice versa. Only I can do that. Like when you annoy me so I make you eat your babies.
PTO Board: What?
God: You’ll see.
Moses: Well, you can destroy us all at any moment, so that sounds fine. Anything else?
God: Don’t combine wool and linen. It gets super scratchy.