Inside the Writing Room of Cards Against Humanity 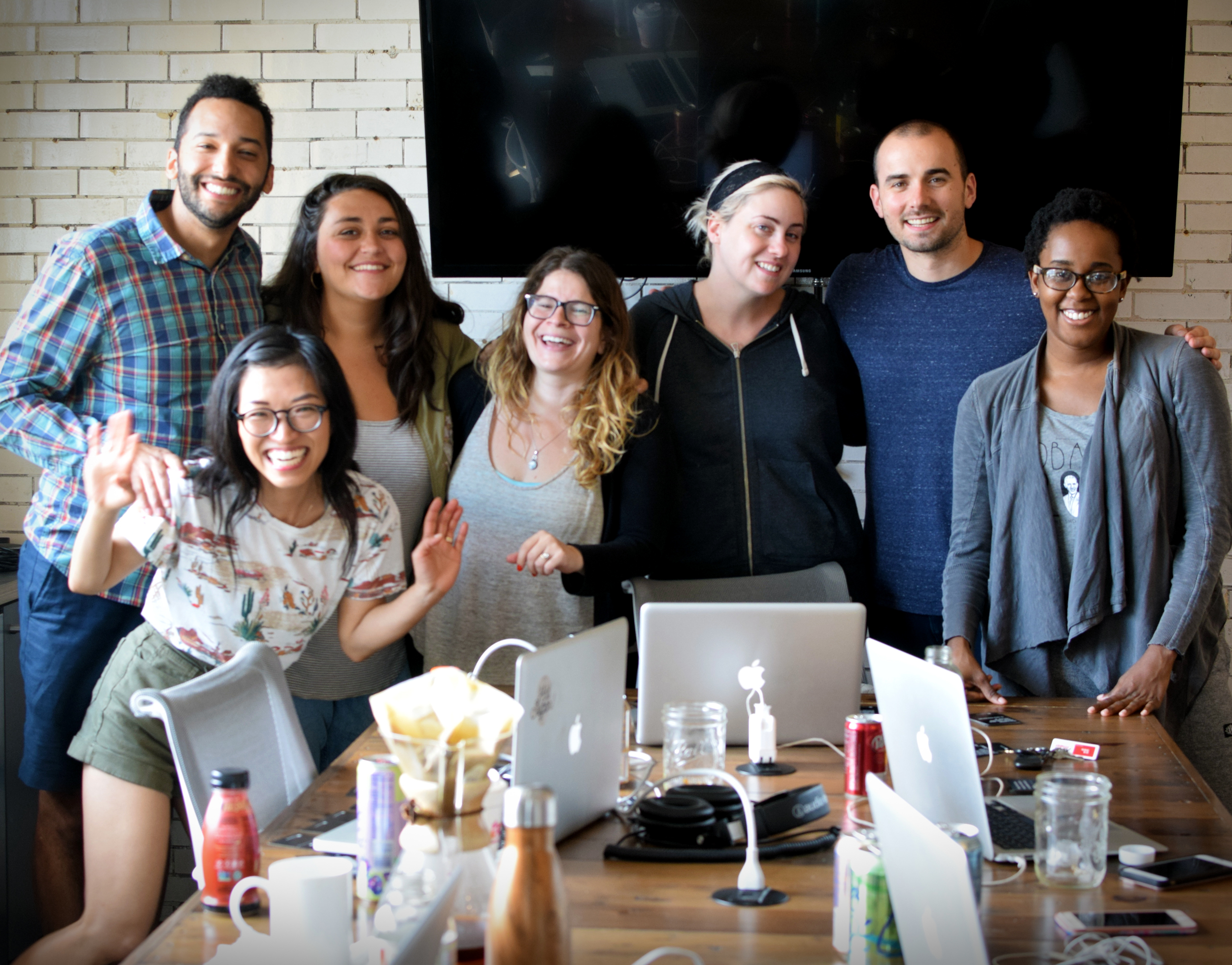 From the outside, the Cards Against Humanity office just looked like a forgotten concrete building in a part of Chicago made for passing through. But walking in was like discovering Versailles in Mary Poppins’s bag. Good god. It wasn’t an office. It was a palace.

The inside was a start-up on steroids, complete with a recording studio for podcasts, a full comedy school-style theater, a room decorated like a Moroccan harem, and a “Japanese Zen room” that we couldn’t go into because a masseuse was giving people massages inside. All this, for a politically incorrect card game.

It was a big moment for me. I grew up in a town next door to Highland Park, Illinois, where a group of friends who went to high school together invented the game. My game aficionado friend broke out Cards Against Humanity for the first time while we were home from college for a break. Looking back on it, that must have been part of the reason I clicked so well with the game: it was invented by people my age from the progressive Chicago suburb next to my progressive Chicago suburb.

Cards Against Humanity is a simple party game in which players made each other laugh by filling in blanks with inappropriate, hilarious cards. Today, it has a massive cult following: It’s the number one ranked “Toys and Games” item on Amazon, and probably has been at least since 2014. The game first became available for purchase in 2011, when I was a sophomore in college, so I must have been one of the first people to play it.

As a young adult, I’d spent most of my life surrounded by older adults very much in the business of telling me what the world was like. Teachers described the United States as a country that, sure, made a mistake (*cough slavery*) or two (*cough Trail of Tears*) or three (*cough reality shows*), but was ultimately the best place on the planet. Ever. Sitcom writers always made sure Lizzie McGuire returned to her loving family and friends by the end of the episode. Copywriters created ads that implied the world was a perfect place full of happy people, provided they bought the right things.

Things like this suggested to me, Holden Caulfield, and probably everyone else who has ever “come of age,” that there was a dark, messy underbelly of the world no one was talking about. People often try to sugarcoat the world for children, but this of course just teaches children that adults lie, which itself feels like a betrayal of this supposedly sugary world. It seemed like the adult world I was becoming a part of just wanted to lock me into a sterile, whitewashed world full of smiling robots. I didn’t become alt right, but I can understand why someone would want to rebel against this seemingly empty cage of a society.

“I feel like pretty much all of the productive things I do academically and socially are for nothing,” posted someone on 4chan recently, “because no matter how successful I am I’ll always have to play pretend with all of the bluepilled people and constantly pander to their unrealistic facade of a worldview that they’ve been indoctrinated to have since their earliest schooling years. almost nothing feels real; it all feels so fake and shallow, and it all feels like everyone is playing pretend just so they don’t have to accept the uncomfortable truth. fuck me, can I even go back?”

Cards Against Humanity was different. It was the fly in the ointment, a paint grenade on a white canvas. It was lewd, inappropriate, full of ideas I’d been told to put out of my mind. It contained, in short, truth. The fact that the cards made my friends and I laugh so much only confirmed it: we were laughing because we knew it was true: “Jerking off” and “A pool of children’s tears” did indeed exist in the same world.

Other players apparently agreed. I found people playing Cards Against Humanity in New York, Boston, D.C., and LA. The game has been sold throughout the United States, Canada, Australia, New Zealand, the United Kingdom, and Ireland. And did I mention the #1 ranking on Amazon?

So it was with a kind of pilgrimic reverence that I walked into the Cards Against Humanity writer’s room to watch the world’s least family-friendly card game get made.

A dozen or so writers sat around a table with their laptops and packs of cards, brainstorming Christmas-related cards for an extension pack.

“Losing my arm in the war on Christmas.”
“Allowing your child to sit on a strange man’s lap.”
“Eating the weakest reindeer.”
“Big ol’ snow titties.”
“I think something about snow titties is so nonchalant.”
“How does it play?”

They drew cards from each of their decks and scrutinized the results like scientists examining petri dishes.

The game’s anti corporate-bullshit attitude becomes even more obvious when you look at the various stunts it has pulled over the years. As a Black Friday deal in 2014, the game sold 30,000 boxes of “bullshit” — which literally turned out to be cow poo. In 2016, the company raised $100,000 on Black Friday to dig a giant hole. This year, it aired a Super Bowl commercial that was just 30 seconds of a stationary potato with the word “advertisement” written on it.

It’s a business, of course, but not one that seems all that concerned about getting people to buy stuff. The game is even available on the Cards Against Humanity website for free download, for anyone who wants to print out the cards themselves.

Despite the game’s crassness, the writers hardly seemed jaded or cynical. Rather, they are Midwest friendly and, of course, quick to laugh.

“Everyone comes from a background of weirdness,” says Jo Feldman, one of the head writers. “So everyone’s just kind to each other.”

Sometimes I wonder if millennials are just so used to living in an artificial world that we’re hungrier than our parents or grandparents for authenticity. That the cheery world created by ads and the Internet share something in common: they’re void of human connection. No one hurts each other because no one can touch each other.

With more and more of the digital and television news worlds starting to look like a clickbait wasteland, and “feminazis” and actual Nazis warring on every screen, this simple card game seems more significant. Here’s a popular game made by urban progressives that in today’s political climate seems like it could have been invented by the alt right. After all, while there are a good deal of racists on 4chan, it seems like there are a lot more people who simply demand the right to joke about anyone and anything, no matter who it hurts.

“How about ‘sticking candles in holes and talking in unison’?” asked one writer, while I took notes. “Every holiday has it.”
“That’s my favorite part about religious ceremonies. Everyone saying stuff at the same time.”
“You would have loved the Nazis, if that’s your thing.”

I once played a game with a bunch of Nerdfighters, a super progressive subculture, who removed certain cards they deemed “too offensive.” And yet, Cards Against Humanity doesn’t really strike me as hurtful or offensive. Its humor comes from its ability to dredge up dark themes and render them harmless with laughter, allowing them to be acknowledged and integrated into the world, rather than pushed out of it. It doesn’t tiptoe around race, gender, or even genocide, but it doesn’t want to hurt anybody; it just wants to make people crack up. And that makes it a kind of perfect marriage of the far left and right: it playfully rejects the progressives’ sterilized world without embracing the alt right’s narrow-minded cruelty. 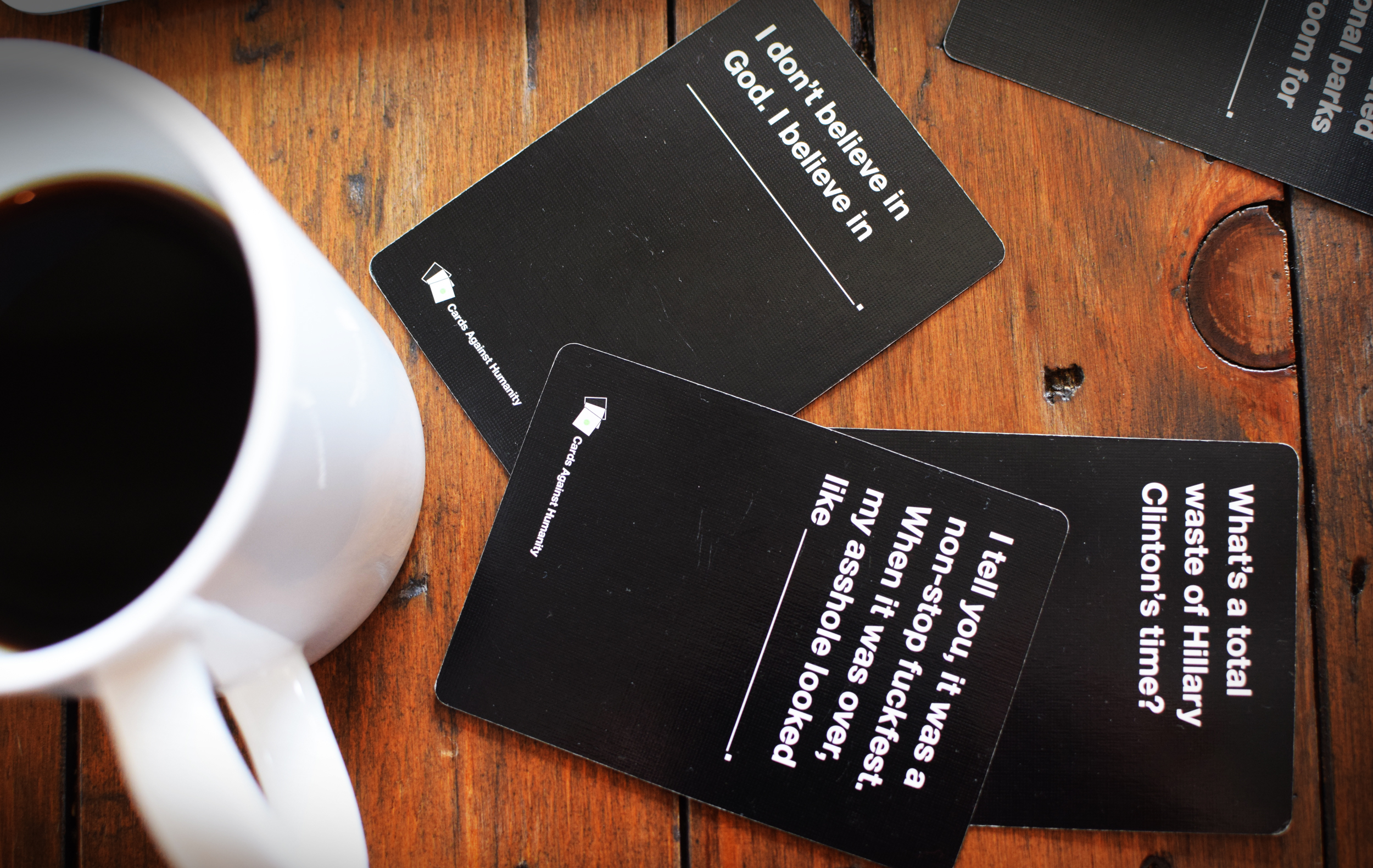 Believe it or not, the writers get upset when they hear of someone using their game to be unkind, like when a writer found out that someone put the “America’s first chimpanzee president” next to the “Barack Obama” card.

“They’re like cavemen that fashioned racism out of that joke,” complained Max Temkin, one of the game’s founders.

“They would hate to know that something they wrote hurt someone’s feelings,” agreed Feldman. That seemed like a bit of a stretch for a game that calls itself “a party game for horrible people,” but I understood what she meant. You can be politically incorrect without being mean.

“I love seeing my parents play it,” Feldman told me.

Her words inspired me to do something I’d never done before: play Cards Against Humanity with my family. When I got home, I broke out the game with my brother, parents, and very traditional grandparents. Good idea? Probably not. Did I have enough self-control to resist? Nope.

My brother and I took genetically identical deep breaths, taught the pre-Cards Against Humanity generations the rules, and started playing.

When my grandfather got to “jerking off into a pool of children’s tears,” he spent a good five minutes trying to look shocked between laughs, chuckling until he managed to eek out the words. No exaggeration: I’d never seen him laugh so hard at anything.

The game did something I never would have expected: it gave three generations, from artsy millennials to old school Midwest grandparents, a way to communicate on the same blunt level. Because that’s what Cards Against Humanity is really all about: bringing humanity together.