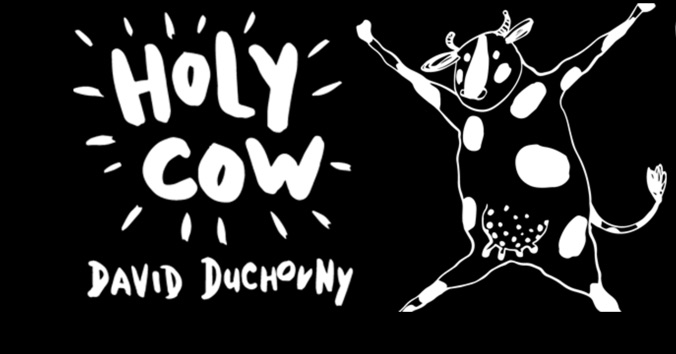 A few years back, I glibly made light of the fact that actor David Duchovny had put pen to paper, and was in the process of publishing a book entitled “Holy Cow,” about, among other things, a semitic swine named “Shalom” (I know, I know) who—through a series of misadventures—ends up bringing peace to the Middle East as he globe-trots with his fellow barnyard brethren, a turkey named Tom and the story’s titular bovine, and enlightened guernsey named Elsie. .

At the time, and with tongue planted firmly in cheek, I wrote Duchovny’s book “isn’t simply going to be good, it’s going to be great. Hell, more than great,” and described it as “a watershed moment” for literature.

I know, I know. Dick thing to say.

When “Holy Cow” finally came out in early 2015, I didn’t read it because, well, who has the time? And when the paperback edition was released in September of that same year, well, I didn’t read it then either.

But, as it happens, I found myself between reads this weekend, and happened to see “Holy Cow” at the bookstore. I figured why not? “You’d already critiqued it, sight unseen,” I reasoned to myself. “How about you actually give the damn thing a try.” Plus, at a svelte 200 pages, it’s not exactly like I was committing myself to Caro’s megalithic “Power Broker.”

Well, as it turns out, the joke I’d started to tell back in 2014 when I’d balked at the mere notion of Duchovny (who, as it turns out, has an M.A. in English Lit from Yale, and they don’t give those out to just anybody, you know) writing a book is squarely on me. Not only was “Holy Cow” not the excruciatingly obtuse celebrity vanity project I’d perhaps been expecting—it was actually a blast. A genuinely fun read, with maybe something important to say, thrown in for good measure.

“Holy Cow” is the story of Elsie, a cow who accidentally stumbles onto the fact that she is, in fact, nothing more than a meal waiting to happen for her human owners. Along with Shalom the pig (nee Jerry) who has converted to Judaism in an attempt to save his skin by way of kashrut, and Tom the Turkey, who starves himself for fear of looking too appealing come Thanksgiving, Elsie stages a barnyard breakout and the three set off for India (where cows are worshipped), Israel (where pigs are left uneaten) and Turkey (where Tom assume’s he’ll be greeted like a king).

Along the way, Duchovny packs the story with plenty of animalistic wordplay, as well as subtle (and occasionally not-so-subtle) observations about human nature, religion, environmentalism, and politics. Which isn’t to say that the book packs the philosophical punch of, say, “Animal Farm.”

But that, clearly, isn’t the point of “Holy Cow.” Where Orwell’s story is heavy handed and imposing, Duchovny spins a lighthearted fable in which readers are simply taken along for a breezy ride, while his bovine narrator makes some decent—if fairly obvious, and simplistic—points about how we live our lives, and how we could live them a little better if we weren’t so caught up in thinking our species was something special.

I just wish it hadn’t taken me two years to figure that out for myself.