For those who lack the time to read all 109 pages of Elie Wiesel’s classic memoir, no worries. Now, with 60 Second Recap, you can learn all about surviving the Holocaust as you update your Facebook status. What better way to understand the complexities of living through a genocide than with one-minute video clips? There are even sound effects. While explaining how Wiesel’s mother and sisters end up in the crematorium, a fire lights up in the oven cartoon above to the sound of flames. 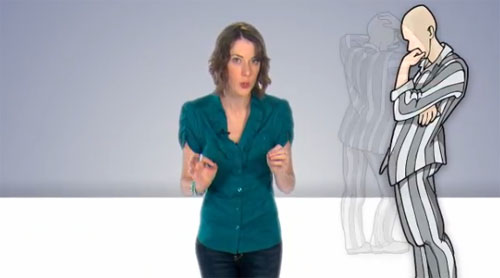 Explaining Auschwitz with a helpful cartoon of a death camp prisoner.

Spokesperson Jenny imbues Wiesel’s tale of death and sorrow with the perkiness of a coked-up morning talk show host. Always appropriate, her first word on the subject is "Whassup!" Other eloquent lines include, "On a scale of 1 to ten, how bored are you?" and "Why are you so upset? There’s nothing we can do about the Holocaust." Anything to relate to the kids, right, Jen? 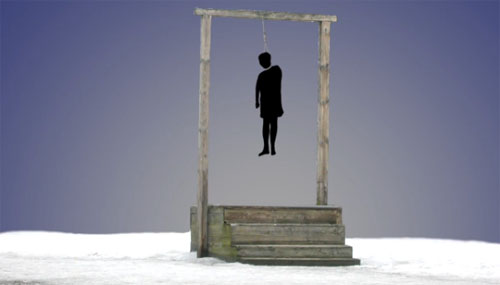 "Remember when the Gestapo hangs the beautiful young boy at the end of chapter 4?"Jenny asks.

But Jenny’s got a good reason for you to read Night: There are other Holocausts going on right now, like in Darfur. (That must just tickle Wiesel. Though very active with in the efforts to help Sudanese victims, the man’s been pretty clear about his feelings on Holocaust comparisons.) 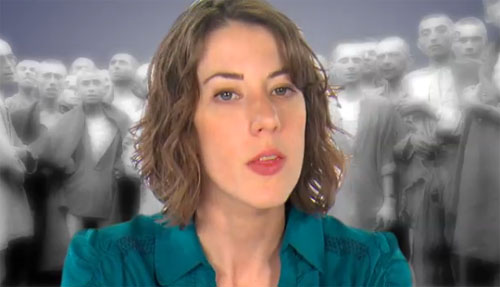 Even in a crowd like this one, Jenny keeps it fast paced and upbeat.

Next month, Night will be condensed into one convenient 140-character tweet. And make sure to keep a lookout for Night, the ringtone.

And they call us tasteless.