Remember when stereotypes were still fun? Jewtopia does! A film based on the hugely successful play of the same name, Jewtopia is about a 31 year old non-Jew (Ivan Sergei) desperate to find a Jewish wife (Jennifer Love Hewitt) so that he doesn’t have to make another decision for the rest of his life. With the help of his friend (Joel David Moore), who is himself in the unfortunate position of being engaged to the the most controlling woman in all of Jewish History (Jamie Lynn-Sigler), our “hero” is able to eventually win over his lady-love along with her overbearing mother (Wendie Malick) and tail-between-his-legs father (Philip Rosenthal). Jon Lovitz and Rita Wilson are also there to serve as the out-of-touch parents to Joel David Moore, ensuring that the B plot is Jewy enough for people who have never actually met a Jew.

All in all, it’s the same story that Jew-controlled Hollywood has been producing for years. Like it’s more goyish counterparts, Jewtopia contains, but is certainly not limited to, the following time-honored Jew tropes, or “Jewpes,” if you will:

1) Jews and Goys just don’t understand each other. Never have, never will.

2) Jewish men are pussies. Jewish women are overbearing bitches. And for some reason, everybody likes things this way.

3) Jewish men love those Asian women. Maybe because during sex, Asian women are incapable of not screaming out phrases in their “native” language. (This is true no matter how well they speak English, or how long they have lived in an English speaking country.)

4) If you wanna be a Jew-girl’s lover, you gotta get with her mom.

It is difficulty to ascertain if the film is more satire, parody, or straight-up farce. The stereotypes of all ethnicities included in the film are so extreme that they are more offensive to the person watching than they are to the members of the ethnic groups they represent, which may very well have been director/co-writer Bryan Fogel’s intent. (For example: Did you know when Hispanic people say the word “you,” i 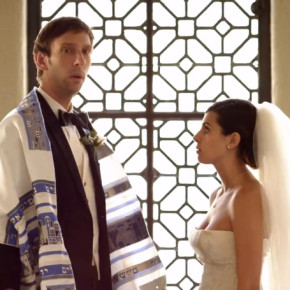 t always sounds like they’re saying the word “Jew?” Also, Asian women are easy, military men are all a bunch of hicks, and Jamaican women be-makin’ you crazy !) There are moments in the film that feel closer to sketch comedy than comedic storytelling, and it is in these moments when the film succeeds the most.

The film contains an overall wonderful cast, the most endearing of which are Joel David Moore and Jamie-Lynn Sigler. While Sigler’s character, Hannah Daniels, is the most annoying human being you’ll ever hopefully-not-meet, Sigler manages to come off as believable and even annoyingly-cute, making it all the more apparent why Sigler is an artist we already know and respect. Sigler’s unfortunate fiancé in the film is portrayed by Moore in such a way that we are able to find him sympathetic, instead of just pathetic. Other notable performances are given by Wendie Malick, Rita Wilson, and Jennifer Love Hewitt, who portrays perhaps the most realistically structured character in the film.

Jewtopia isn’t for everyone. But with over a million people having seen the play (that’s right, in good-old-fashioned theaters!), it certainly is for a lot of people, at least in some form. One thing is for sure: Whether you find the stereotypes and tropes in Jewtopia to be hilarious or annoying, you will certainly find them.