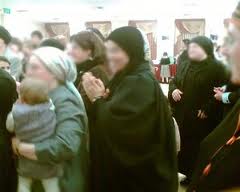 What will they think of next? Haredim in Israel have begun marketing eyeglasses meant to blur the vision of its wearers from seeing women on the street. Just bought a new pair of specs before the release of this new technology? Have no fear; the company offers stickers to place on your existing glasses resulting in the same blurred effects so you’ll never have to (clearly) see a live woman again!

In a community that photoshops the elbows and knees of women in its public newspapers, this was an obvious next step in the efforts to minimize the viewing of any women. I wonder if the same company that markets these glasses is working with Haredi doctors in Meah Shearim to perform laser surgery to permanently blur one’s vision?

And don’t worry, rabbis have permitted the removal of the blur-glasses if the need arises to throw stones at vehicles driving on Shabbat. Wouldn’t want the bad aim to result in hitting a woman – or wait, would we?