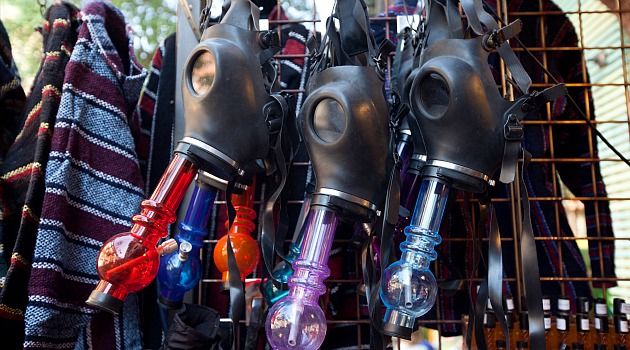 If you are an adventurous New Yorker who is adequately prepared for the zombie apocalypse and who also enjoys weed, you may have used a gas mask/bong combo. If you haven’t…you definitely should. It will either be the best experience of your life or the worst. It could also be both.

These bong masks are a prime example of one of the greatest dichotomies of stoner life: despite the fact that we are all lazy fuckers, we will go to incredibly complicated, outlandish and ingenious lengths to get really, really stoned.

The gas mask/bong combos can be found on the major thoroughfares in New York City: St. Mark’s Place, Union Square; basically any street with more than one falafel restaurant or a 2 Bros Pizza. They are, depending on the mood of the person selling them to you and how expensive your clothing looks, relatively cheap and easy to find. This fact makes it surprising to learn that in Israel, where the bong-less gas masks are used by civilians to actually filter dangerous gas (rather than imbibe it), there is a shortage of the masks.

The Israeli government has just finished distributing four million of the 4A1s masks, fitted with filters to protect civilians from poisonous gasses and biological warfare. Production on the masks has now stopped due to budget constraints and now as many as 40% of Israeli’s won’t receive their masks. While Israeli citizens are worrying about the eventuality of a chemical attack, NYU freshman are stuffing towels under the doors of their dorm rooms and strapping on their masks. Ah, capitalism.

(via The Jewish Daily Forward)