Film Review: Wish I Was Here Creates A Beautiful Collage 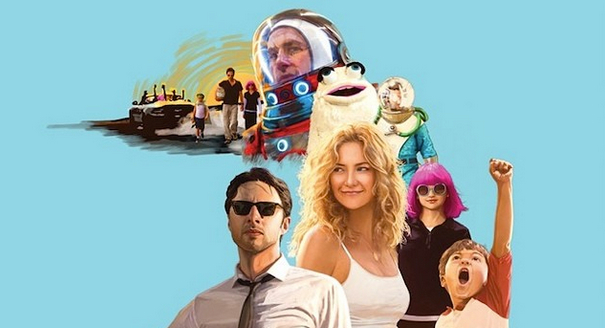 Aiden, the protagonist in Zach Braff’s Wish I Was Here, gazes out into the mountains.

“To prepare a face to meet the faces that you meet.”

“There will be time to murder and create.”

Prufrock. He’s quoting Prufrock.  I cringe. If you spliced together all the student films where somebody recites that poem, you could stretch the reel from Hollywood to T.S. Eliot’s grave. And Eliot was buried in England.

But then, that’s Zach Braff’s thing, isn’t it? Characters saying how they feel, realistic dramas, concrete symbols. Braff is, simply, not a subtle guy. Clear as glass honesty is part of his appeal. And it is appealing. Isn’t it?

Sorry, I got lost in the analytical woods too quickly. I’ll follow the breadcrumbs out.  Appeal. Zach Braff’s honesty. Prufrock. Aiden.

Aiden (Braff) is a married father of two and a struggling actor. His wife, Sarah(Kate Hudson), works a data entry job that she hates to support the family. Aiden has a crippling fear of public schools, so his father (Mandy Patinkin) pays for the kids to attend an orthodox Jewish school. Aiden, meanwhile, can’t help but imagine himself running around as an absurdly majestic superhero in a spacesuit, like a grownup version of J.D.’s daydream persona in Scrubs. 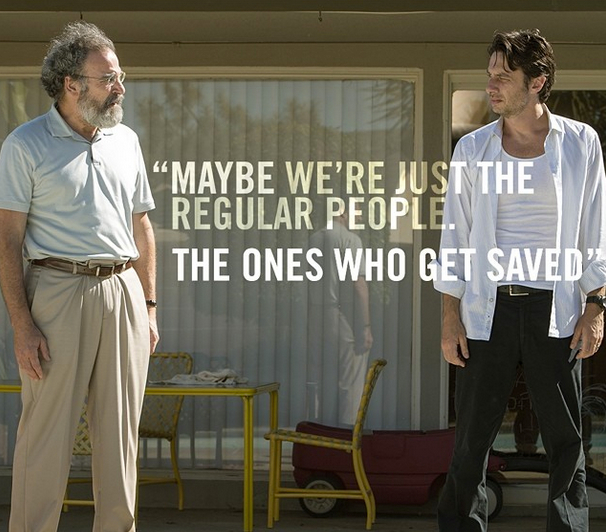 Early in the film, we learn Aiden’s father has cancer, and he is going to stop footing the bill for his grandkids’ education in order to pay for his treatment. Aiden’s stuck trying to figure out how to keep his kids in private school. Plus he’s got to deal with the fact that his father has, you know, cancer.  Aiden asks the school’s head rabbi (Allan Rich) for financial aid. The rabbi explains that scholarships are reserved for students in real need, not those whose father insists on being an actor. Aiden goes on a rant about how God wants him to pursue happiness, to which the rabbi responds that he’s confusing the Bible with the Constitution.

I’m probably supposed to be on Aiden’s side, but find myself agreeing with the rabbi: Sarah tortures herself with data entry while her husband goes on auditions. Why should she sacrifice her day-to-day happiness so he can fulfill his dream job? Why should his kids deal with leaving school? And can’t Aiden at least get a bar-tending gig on the side or something?

Wish I Was Here does a great job showing Aiden’s flaws while still making us root for him. He’s horrified by the prospect of sending his kids to public school, where they’ll be forced to memorize Hamlet and learn about magnets with the rest of the middle class. (Oh, the horror.) Aiden isn’t the 99% just trying to live his life. He’s the 99% trying to live like the 1%, a reality that’s as painful for him as it is irritating for us. At the same time, Aiden’s dream hits pretty close to home. Who doesn’t want to reach their personal heights?  Besides, Aiden stands tall despite the many forces trying to squash him, and he’s not afraid to ask the questions that secretly preoccupy most of us. We live in a world where we are all told to reach for the stars and subsequently punished for doing so. It’s about time someone questioned that. 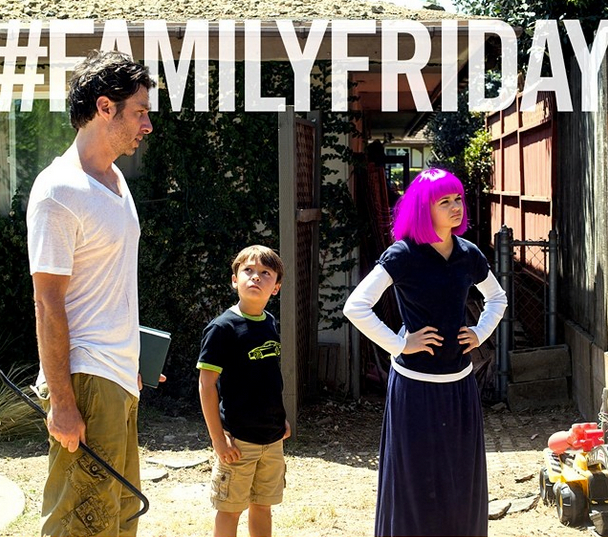 To his credit, Braff doesn’t give himself the sole juicy role. Aiden is but one among a host of complex characters. In particular I found myself impressed by Aiden’s daughter, Grace (Joey King). I’m sick of teenage girls portrayed as pampered, whiny princesses on screen. Here, finally, is a smart, sensitive teenage girl, who is sometimes afraid to speak her mind and sometimes surprisingly brave.

While I couldn’t quite convince myself of the severity of Aiden’s financial circus, I was floored by Braff’s decision to include Aiden’s religious struggles. Most people I know are too uncomfortable to chat about religious wrangling with their friends, let alone broadcast it to mass audiences. Popular art in America generally deals with religion in one of two ways: You’ve got your pro-religious stuff (Christian rock, for instance), which is usually about lost souls finding God or found souls celebrating God or something. Then there are projects that make fun of religion (The Book of Mormon). It’s unusual to see art that respects both sides, but Braff pulls it off.  In one scene, a rabbi inspires Aiden to view God in a new way. In another, a rabbi crashes a moped into a wall. The film grapples with spirituality in a way that’s neither wholly celebratory nor wholly slapsticky. Instead, it’s more like real life.

Wish I Was Here often feels more like a collection of touching moments than a story. As a big fan of Braff’s Garden State, I wasn’t expecting this film’s events to make rigid narrative sense. But I did expect them to make emotional sense, and I’m not sure they lived up to that expectation. Things get better and worse for Aiden, better and worse, with no real progression. Events barely affect one another.  On the flipside, the film was stuffed full of profound and hilarious moments. Moments … that’s more or less what the film comes down to. Exciting, dull, funny, redundant,  poignant, cliché, beautiful moments. Moments, I should add, that benefit tremendously from breathtaking camerawork: from striking silhouettes to glittering landscapes, almost every scene is a work of visual art. I wouldn’t be surprised if this ends up a case study in collegiate cinematography classes.

So, okay, Wish I Was Here film didn’t knock the ball out of the park. But it took risks, and, just like in life, maybe that’s better.

*****
Wish I Was Here opens in theaters July 18th. For more visit wishiwasheremovie.com