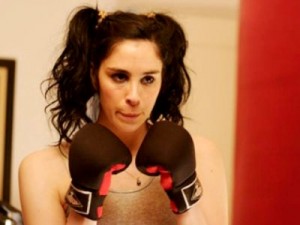 Run of the mill talky family dramedy is the first phrase that comes to mind when trying to describe Barry W. Blaustein’s Peep World, but that PR moniker really undersells it. If you can’t handle a feature length exploration of the haves (think The Royal Tenenbaums but with less style), this may not be the film for you. Still, it features some wonderful, understated performances that are worth checking out.

The film follows the exploits of an affluent Jewish family in Los Angeles, the Meyerwitzs, after the youngest son, Nathan, publishes a novel that skewers his siblings. The entirety of the film takes place the day of a birthday celebration for the family’s megalomaniacal patriarch, Henry. Revered as a captain of industry (he’s a real estate developer) and limitless ATM to his floundering progeny, we barely meet Henry until late in the second act of the film. Instead, we follow the four siblings as they prepare for their evening convergence.

Sarah Silverman deftly fills the role of Cheri, the daddy’s girl wannabe actress who is eternally bombing auditions. Over the years, Silverman has honed a character in her act and in various appearances, the interminably adorable duncy racist, the village idiot with a heart of gold. In Peep World the comedienne throws that out the window and gives us something totally new. She is depressed and vicious, funny without trying. It is great to see her acting chops shine.

The never-gonna-make-it-actress isn’t the most hopeless Meyerwitz. That role falls to Joel Meyerwitz, played by a bearded Rainn Wilson. Wilson appears to be on a tear in 2011, letting the world know that there is life after The Office for him. Peep World is one of three releases with him in a lead role (Hesher and Super are the other two) hitting theaters soon. Here, he takes on the sophisticated fuck-up; the man child who is too endearing not to open your heart and your wallet to. Along with his muted outing in Hesher, I’d say Wilson is making his point loud and clear: he is a versatile actor who will do fine if Dwight Schrute ever leaves Dunder Mifflin (I’m guessing he’ll go via bear attack).

Michael C. Hall is “the good one”, Jack, the son who tried to follow in his father’s footsteps and funds the foolhardy extravagances of his siblings. He is the straight man who acts as a ground to the insanity around him. Finally, Ben Schwartz plays Nathan, the wunderkind author whose exploitive novel shares a name with the film. For the most part he’s serviceably annoying (it’s a compliment).

Peep World has many weaknesses. It runs on too long and wraps up on a poor note. Worse, however, is that it feels like a script from another era being made in our own; like a script written in the 1990s that was meant to hearken back to the 1970s. For one, Nathan’s success as an author isn’t believable. He’s living out the fantasies of Philip Roth’s Nathan Zuckerman after his early successes. Money, women (well, woman), status; these aren’t the currency of writers today. Moreover, for someone with so little going on it seems unlikely his debut novel would be so well-received, even if the joke is he just stole the whole tale from his family.

Take, for example, the scene in which Nathan suffers a debilitating erection at a reading. Not one of the happy listeners whipped out a phone and started recording the incident. Demi-celebrities can’t pick their nose in public without snoops texting evidence to TMZ these days. Sure, it would have added another layer to the joke that perhaps wasn’t necessary, but cues like this (or a champagne-drinking toughie named Wizdom, Silverman’s Dave Matthews-concert couture) belie the fact that this is a story that simply doesn’t fit in the here and now.

The performances make the whole thing worth a peek, and I haven’t even covered all of them. Judy Greer, Stephen Tobolowsky, Taraji P. Henson and Ron Rifkin all bring extra laughs. Peep World isn’t a bad film; it’s just weak. Still, I found myself laughing enough throughout to recommend it.