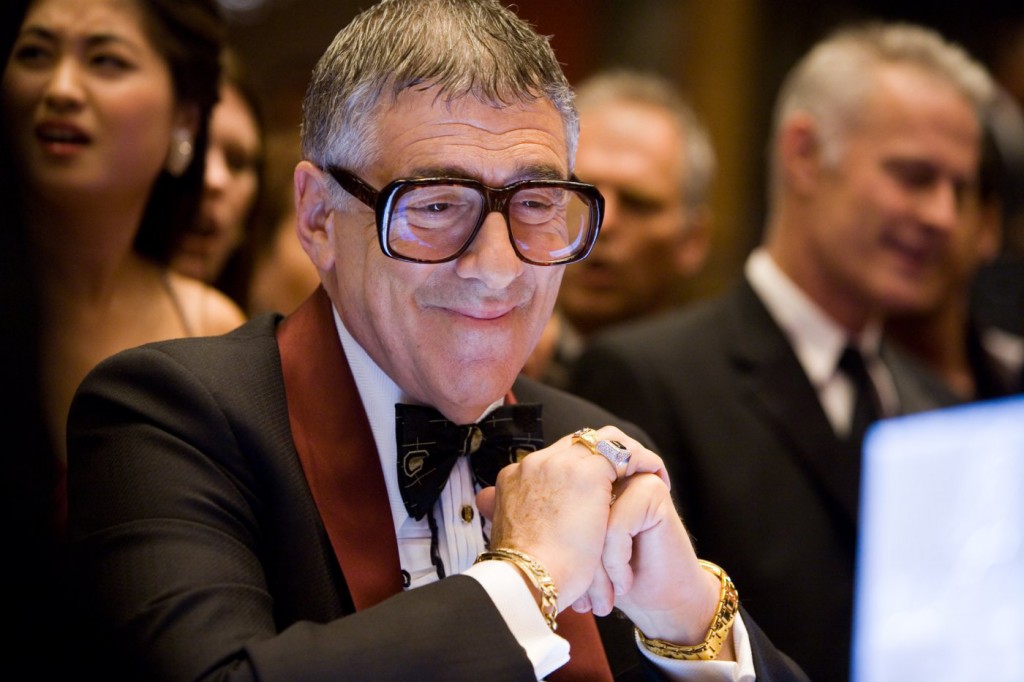 The filmmaker Joshua Safdie sat on the Walter Reader Theater’s stage. He looked to the ceiling as if the words that would form his next question were hidden somewhere in the rafters. A woman’s shrill voice from the seats interrupted his train of thought: “I’m sorry, can we just get back to Elliott Gould?!” The plebes were restless.

The event was a screening of Ingmar Bergman’s rarely shown The Touch from 1971. The film’s star, Elliot Gould, was in the house for a moderated discussion. It was showing as part of a series called “Hollywood’s Jew Wave,” curated by the Film Society of Lincoln Center and film critic J. Hoberman. The slate’s main conceit is that Hollywood films in the late 1960s and early 1970s featured an “unprecedented” amount of Jewish characters, actors and filmmakers. Other films on show were Annie Hall and The Apprenticeship of Duddy Kravitz.

Joshua and his brother Benny Safdie, whose 2010 Daddy Longlegs earned them critical praise, did their best to have a conversation with the Hollywood legend, but they underestimated the task at hand. They kept nudging Gould, trying to impress their own beliefs about his roles and his life upon him. They even thought David, the lecherous and violent archaeologist at the center of The Touch, represents some kind of a gruff, raw masculinity, a Jewish hero of sorts. “You’re wrong,” Gould insisted. They even meandered around whether or not his performance (in which he slaps, badmouths and emotionally tortures his paramour) was somewhat autobiographical, noting that he was still married to his first wife, Barbara Streisand, when the film was made.

The day before the screening I had the pleasure of speaking with Gould. Sitting there as the Safdies struggled to keep things together, I was tickled and somewhat relieved. I had already been through the experience of barreling through a conversation with him; it was nice to know I wasn’t the only one who had a rough go of it.

Elliot Gould typifies, perhaps more than any other actor of his generation, the dark, brooding, intellectual New York Jew that has become an archetype. He speaks carefully and with a Talmudic weight, so much so that even when he bounces around ideas incoherently, he comes across as sage-like. When I asked him his thoughts on the title “Jew Wave,” he surprised me. “I thought it was rather provocative. I was somewhat taken aback by it.” For me, a young Jewish cinephile who believes, who knows that there was a Jewish artistic renaissance around the fat middle of the last century, to hear Elliott Gould suggest such a title is a provocation, I am caught off guard. Stunned, really.

What is it then, I ask, that is provocative about it? “As funny as we are I don’t think it’s funny being a Jew. Who wants to flaunt anything? I think it’s difficult enough to be a Jew in this world and it always has been. I’m sensitive about it.”

I wander around the question again, pointing out that it seems there was a preponderance of Jewish characters, actors and filmmakers when he rose to fame. “No, no, no. I don’t think that way. I’m not terribly into categorizations and my belief is that fundamentally religion is discipline. And I believe in discipline. I certainly don’t want to actively provoke unnecessary reaction to what we Jews are which is a certain kind of human being related to the rest of us. I never want to be pretentious or assumptive or take anything for granted.”

I am now in Gould’s wilderness. The next thing that runs through my mind is “Oh shit, I’m not prepared.” All of my questions relate to him being among the first Jewish leading men. Though I would love to speak with him about roles from later in his career, rarely does the opportunity arise to ask about his earlier, and arguably more celebrated, work. I want to get to the bottom of this time period that I, and others, view as a great one for Semitic cinema. I thought, foolishly, this would be easy. 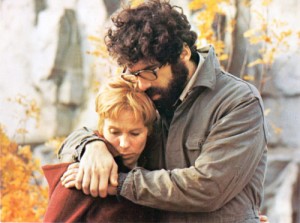 Elliott Gould and Bibi Andersson in The Touch, 1971.

“Jewish characters?” The phrase irks Gould when I use it in a sentence. “Character is character. You don’t have to be a Jew to have a character. A Jew has worked at it for a very long time, probably longer than most, by a thousand or some years, right?”

It isn’t long before he turns the tables and starts asking me a few questions to break uneasy silences. “Are your parents alive?” he wonders. They are. “Good.” I can only assume this is a reference to Philip Roth’s Portnoy’s Complaint which bears the quote “A Jewish man with parents alive is a fifteen-year-old boy…” You’re a pisher, he’s telling me, get on with it. Here I had a legend reciting the gospel of Roth to me, and yet he balks at referring to the late 1960s as the beginning of a surge of Jewish artistic contribution?

I start to wrap my head around Gould’s discomfort once I ask him about his work with Robert Altman. “Working with Robert Altman was a privilege for me; a relationship that developed into a very close fruitful, stimulating and creative relationship. He was in ways somewhat like my father. But he wasn’t Jewish.” No, he wasn’t. Their collaborations, including MASH, California Split and The Long Goodbye, were epic, on the fore of a new style of filmmaking that would push Hollywood forward. Not only was Altman not Jewish, Gould’s characters in those films weren’t either. If we believe Trapper John represents some kind of Hebraic ideal, that’s our problem. On the one hand, Gould is proud of his heritage, fully aware it is what makes him the star he is; on the other hand, to imply that he is successful only because he is a Jew is inaccurate, indeed it’s provocative.

“I’m extremely fulfilled,” Gould tells me, “but our work never stops. There’s one thing that I could never do and would never do is deny my roots.”

What would it be to deny his roots? He laughs at me when I pose the question. “I don’t know. It would be stupid. It’s not a possibility.” He then moves, in his own non-linear way, into a story about a role he didn’t get to do. “I was once asked if I would play Elie Cohen in a project called ‘Our Man in Damascus’ and Elie Cohen who was hung on television.” At this, he gets momentarily choked up, which he immediately replaces with nervous laughter. “He became the number one political guy in Syria. We know how we’re hated and how we’re resented and how a great part of the world would rather we not be here.”

Even when I try to lighten things up and move to other questions, he wants to return to Judaism. I get the feeling he has thoughts he wants to get off his chest. “I couldn’t have imagined or believed that one like this, like me, Elliott Goldstein from 6801 Bay Parkway, Brooklyn, New York, could get to the front and participate and contribute, and I’m there. It’s taken me forever to get here and I want to know that I’m giving everything.”

When I ask him how Jews still have to work hard to get ahead, he tries to answer, but the truth is that there is no sufficient answer. As he told me earlier, character is character. 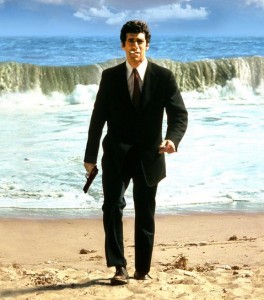 Before we part ways, Gould has a few more words on his Jewish identity he would like to share with me. “Being an idealist it was difficult for me to be brought up by people who would be practicing a religion and didn’t believe. I love to believe. But then I realized that for me, the concept of God is the ultimate ideal. Yeah, I accept! Sometimes, I think if I knew what this world was about before I embarked on this apparent career that I might have gone in a totally other direction and studied more and learned more and been Ultra-Orthodox and even Hasidic. But I’m not.”

I tell him he is speaking passionately, offering answers coming from a deeper place than I expected when we set up the interview. “There’s a lot going on in my life right now and so I’m very open. You can obviously hear it. I appreciate it, therefore it’s a privilege for me to share this because I share it in my work and I share it abstractly; I’ve never explained some of these things.”

I wonder whether or not our conversation isn’t just another abstraction. After a prolific (and continuing) career, it’s difficult to see where Elliott Gould ends and his work begins. He bit back at Josh and Benny Safdie at the Bergman screening because they were taking their own life experience and saddling it onto him. He doesn’t see things that way. When I asked Gould a question about his cameo in Nashville, he got sentimental. “It moves me because this is all a part of my life and my work.” We get to live vicariously through his characters. He has no such luxury.

Our interview ended a few minutes before I realized he was done talking to me. I’m not sure what else I could even ask, so puts a sticker on the thing. “I’m talking from my heart and I’m vulnerable but I don’t want to tell any more stories right now. What more do you want me to say?”