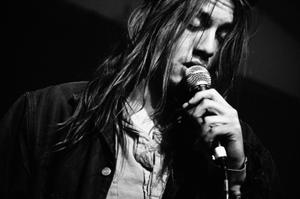 When Pitchfork writer Larry Fiztmaurice made a passing reference to the unfortunately named micro-genre “rape gaze” in his review of Salem’s King Night last week, the Internet reacted. Now whether the genre is real enough to warrant a placard in your local record store (it probably isn’t and it probably won’t), that isn’t the only controversial thing about the review: The indie rock taste-making site perplexedly gave the album a 7.5 out of 10.

Salem is a trio of twenty-somethings from Michigan that found an outlet in recording music, two guys and one young lady respectively named Jack Donoghue, John Holland and Heather Marlatt (one is a former prostitute and meth addict). Critics will attribute their sound to 80’s horror movie soundtracks, church music, trip-hop, “witch house,” and Southern hip-hop, which all sounds incredibly compelling in theory. In practice, though, it is a headachey mess which culminates into the worst album of the year.

King Night is eleven songs of music for serial killers, depressingly unambitious and monotonous in it’s over-the-top “drama.” At times, angelic and synthetic vocals melt so sloppily into one another, you would think this album was made by children who had just discovered a synthesizer. And at other times, Donoghue unfortunately raps (if you can call it that) mumbling the lyrics through a vocal manipulator as if he had just been awoken at 3 AM with a request to imitate Freddy Krueger. Never mind the fact that the band won’t talk about lyrics (“It doesn’t really matter to me whether people know what the lyrics are or not,” Ms. Marlatt said), critics theorize that the content may about taking drugs. And sex. And car crashes.

But when three individuals work so incredibly hard at looking like they don’t care about anything (when the New York Times profiled them, Donoghue didn’t even bother getting up for it), when a proverbial middle finger is lifted so high in an elaborate high art/ lowbrow experiment, why should we care? I can’t blame Salem for enjoying this accidental fame. In fact, Spin features a quote by the band in which they say, “we aren’t going for anything, ever.” However, I can blame critics for championing a musical act that thinks we’re all idiots. Well, some of us are…

I first saw Salem perform at Austin’s SXSW festival at a now notorious show in which the Holland, Marlatt, and Donoghue seemed completely uninterested in entertaining (see footage of that performance here) but this time, the audience reciprocated by booing them off the stage. It aggravated me that in a climate in which everyone worked their hardest to prove themselves to a media outlet, a label, or sadly, in some instances, just some guy serving drinks behind the bar, I was witnessing total apathy (or art? Or are they the same thing?). Nevertheless, I did not boo. It’s not polite and never appropriate. However, the more I read the reviews and hear people praising the music, it’s getting progressively harder and harder to hold back.

SALEM – ASIA from SALEM on Vimeo.