Showtime’s new roundtable show, The Green Room with Paul Provenza, gives high-profile jokesters a chance to comment on their very important craft (and talk a whole lot of shit about each other). Premiering June 10, the amazing first episode has Roseanne Barr, Patrice O’Neal, Bob Saget and Sandra Bernhard speaking about their careers and comedic styles, and the domestic goddess even explains the vision behind her Heeb Hitler photo shoot.

In town to promote his book Satiristas!, the director of The Aristocrats gives Heeb a comedy State of the Union, parsing out the talent from the hacks and explaining the difference between stuff that uses racism and sexism intelligently and shit that’s just racist and sexist. Find out from the day’s leading comedy journalist why the “N-word” is more offensive than “nigger” and what makes Sarah Silverman much, much smarter than Andrew “Dice” Clay.

So how did you get this gig with Showtime?
My producing partner [Barbara Romen] and I had been doing a bunch of live stuff at comedy festivals, and it just was so much fun — so down and dirty and loose. We did, like, 26 shows. They were just packed, star-studded. Then we pitched it to Showtime, and they took a massive leap of faith. We did six of ‘em.

So is the new show a play off The Aristocrats? Between In the Green Room and Satiristas!, you’ve sort of become the comedian’s journalist.
That’s not necessarily by design. You know how they say, ‘Write what you know?’ My world has been so embedded in comedy, and I’ve discovered that it’s very interesting that when I look at the sort of basic fundamental human experience through the lens of comedy, there’s something different about it.

I actually find that the same way some people are moved by music, and they’ll devote their whole lives to music — where it’s clearly a passion and nobody questions it. It’s the same with comedy, if you view it as an art form and can dissect it as an art form, and see who are the real artists and who aren’t. 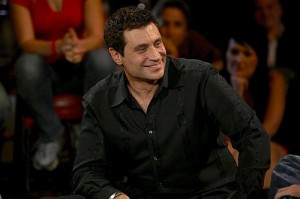 So what’s the distinction between good and bad comedy?
There’s a big difference. My friend sent me a link to one of these blogs that has The 10 Most Hated Comedians of All Time. You know, there are dozens of best/worst lists.

Dane Cook has got to be on every one of ’em.
Well, here’s the thing — Sarah Silverman is on this particular list. And so my friend goes, ‘What the fuck is Sarah doing on anybody’s list like this?’ And I actually wrote a comment in on it, and I said, ‘The difference between Sarah Silverman and everybody on this list,’ —  Carlos Mencia, George Lopez, Dane Cook, Carrot Top, Gallagher — ‘is that Sarah is working at a level of intelligence with layers and ironic twists all over the place. What you’re criticizing her for is exactly what she set out to do, knowingly. So you’ve actually been suckered into the joke.’ With everybody else, there is no other layer.

But that level of irony is challenged more often lately — that it’s a thin veil and just an excuse to say “kike” 27 times a night. Pretending to be a racist when, in fact, you really are one.
That’s the debate, but that’s not what she’s doing there. It isn’t really about that. What she’s doing is embodying this sort of self-centered, clueless, un-self-aware person that’s rampant in America. Look at the things she talks about. It’s not just race. It’s sex, it’s sexuality, it’s gender, it’s politics, it’s everything. She’s mocking that ignorant, secure, unquestioning, self-centered sense of entitlement that so many people have now.

The other argument about how it’s just a post-modern way to be racist — I don’t believe that. I think that’s a whole lot of hokey. The truth is that everybody I know who does that kind of thing in comedy knows very well what they’re doing.

Was the “Diceman” self-consciously aware back in the day?
Interesting question. I don’t think so. When he started out, he was doing a character. He set out to make this character rich and alive, but he’s not smart enough to separate himself from it, or to articulate what he’s doing, so he just played the character in contexts where the character was inappropriate. So he just became the character, ultimately.

Is the whole comedy style a response to Clinton-era political correctness?
All kinds of stuff has been co-opted like crazy. I defy you to find any sort of a movement that hasn’t been co-opted over a certain amount of time. That’s what’s happened with P.C. stuff. The truth is that most quote-unquote ‘censorship’ — and I put it in quotes because really, censorship by dictionary definition is governmental. We have a lot of corporate censorship, we have a lot of social censorship, all that sort of stuff — most of that censorship actually comes from the left.

So what happened at that point when something as laudable as changing the way we look at minorities — all that kind of stuff, all very important things — but it’s gotten to the point everything has to be black and white, everything has to be really blatant. Nothing can be nuanced. It’s really become a witch hunt of the left’s own making. The truth is that you can say anything you want, as long as you don’t use certain words. So what have we really solved?

Louis C.K. has a brilliant bit about how he finds the actual phrase “the N-word” more offensive than the word “nigger.”
Oh, I agree. It is offensive. I’m not trying to say there’re no issues with race anymore, but the truth is that we’re in a multicultural world, and the chances are very slim that your kids will not marry and have kids with somebody of a different race, or bi-racial. Or multi-racial. Or whatever. So it’s, like, we can keep these sorts of paradigms of race, or we can show how they actually really are working in real life. Comedy’s a great way to do it.

When you see Patrice [O’Neal] talking about why he likes to say ‘nigger,’ and all that sort of stuff, and Paul Mooney and Bobby Slaton are on the same panel, making racist jokes about each other, it can get really vile. But they’re friends and colleagues, and we never get to see races interact [on television] in the way real friends actually do. You make fun of your black friends, your Hindu friends, your fuckin’ Pakistani friends. If they’re really your friends, you make fun of each other all the time.

Because it’s not about that. It’s what’s behind the insults.
Right. There’s also a certain irony in the fact that I’m saying this to you because we’re so secure in what we know about each other and feel about each other, that it’s funny that it’s even an issue! That’s those multi-layers that get too complicated for the press and the average show and anything that’s a sort of collective mentality. So that’s one of the things we were doing on The Green Room. We’re really proud of the fact that we call each other horrible, vile things.

Catch the first episode of The Green Room with Paul Provenza on June 1o.