In this country, we have seen an incredible erosion of what some have dubbed the “middle class film.” The definition of such a film is something of a moving target, but you probably already know the kind of movie I mean. I’m talking about films that cost less than $100 million but more than, say, $1 million; films that are no safe bet yet are still made on more than a few credit cards by street light. In the UK (and much of the rest of the world; we’re a special kind of deprived in the states), thankfully, these films still seem to exist, and John Goldschmidt’s Dough is a perfect example of why that’s a very good thing.

Nat Dayan, played by the always excellent Jonathan Pryce, is an aging Jewish baker in the East End of London a neighborhood that is fast getting bulldozed by the promise of progress. The clientele for his kosher sweets and challahs is fast winnowing away, or else they’re going to the slick new grocery store that has opened up next door, Cottons. It’s a story told a million times over: times change, but what are we to do with tradition? Nat is an artisan in an era that has no room left for them. 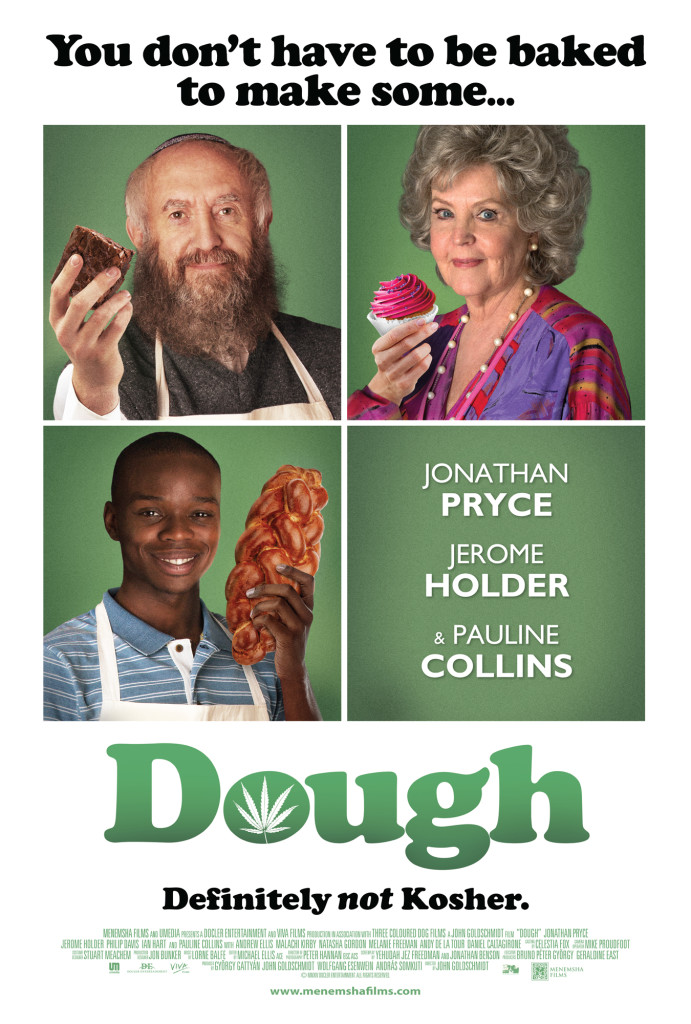 Meanwhile, Ayyash, in a spirited performance from the young Jerome Holder, is a Muslim immigrant from Darfur on the cusp of starting his life out on the wrong foot. Dreaming of a better life for himself and his mother, Ayyash gets in with the wrong nudniks, needling his way into a gig unloading weed for a low-level, but clearly unhinged, dealer. In an effort to get him off the treacherous path before him, his mother, who cleans at Nat’s shop, gets Ayyash an apprenticeship at the bakery, thus setting our plot in motion.

Dough is a simple story told simply. We have two characters who couldn’t be bigger foils for each other: the aging widower Jew looking for solace and the young African Muslim edging toward a life of crime. And, you guessed it, their humanity brings them together. There is, of course, a strange misadventure that catalyzes their friendship. Ayyash at first starts selling pot from the storefront, but one day accidentally tosses a few buds in dough mid-mix to hide it from prying eyes. Unable to extract it or toss out a day’s work, he bakes the bread which later bakes Nat and his whole family, including his small granddaughter. It’s the friendliest Shabbat meal they’ve shared in years! A light bulb goes off, cannabis gets baked into everything and sales go through the roof, all while Nat seems unaware.

I’ll forgive the filmmakers their seeming unawareness of how pot edibles work (or even how pot looks; hint: oregano is a terrible stand-in) because the film is so sweet, it’s easy to suspend one’s belief. Emotionally, these are two men at very different stages of life who need direction and structure. Their adventures, including a bit of late night derring-do featuring what may be the first on-screen lock-picking performed by a yarmulke clip, provide that and set them both down a better path.
Dough is not perfect by any means. Writers Yehudah Jez Freedman and Jonathan Benson have crafted some lovely characters in our leads, but move too fast toward the end to tie everything up nicely. Ayyash’s sins are maybe too quickly forgiven, though Nat is not without blame. One of my favorite turns in the film is when we learn that Nat is a Londoner through and through. In the Diaspora, the story of the Jews is so often an immigrant’s tale. Even in cases where this may be true, it is often a crutch to paint the Jew as an other, an outsider. Nat bites back when it is assumed he came to Britain from elsewhere. It’s a lovely character aspect, made all the more forceful by the fact that he now takes on an other, an immigrant as an apprentice. In the end, despite our differences, we’re all human, and it helps if we work together.
*****
Dough opens in select cities April 29th. For more information, visit the film’s official site.