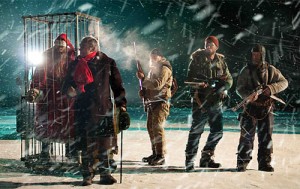 Rare Exports – A Christmas Tale is either a brilliant tell-all film about the true origins of Father Christmas that the Coca-Cola company never wanted you to see…or a fascinating exploration of what the outcome would have been if darkly quirky Finnish movie types had remade a film originally starring Bruce Willis.  It’s likely destined to become a Christmas classic for those who view Bad Santa as just a smidge too sweet for their tastes.  I went in with high expectations that were mostly satisfied by this offbeat holiday film.

Near the border with Russia, the Sub-Zero corporation is in the process of trying to unearth the original Santa.  Buried long ago in ice, this Santa is more of the “thrash bad children to the point of incapacitation with the occasional boiling them alive to keep things interesting” sort of creature.  So of course when he’s pulled out of the ground some bad things are going to happen – at the very least he’s going to be hungry. And you won’t like Santa when he’s hungry.

There are scares, beautiful photography, well acted father/son moments and of course gingerbread. Not to mention copious amounts of blowing shit up. Basically something for everyone. The film skimps somewhat on character development, but it hits the highlights of what most people will be looking for. Namely a bunch of goyim taking up arms against jolly ol’ Saint Nick.

I liked the darkly beautiful visual style and under spoken roles of the adults. The young lead character Pietari (Onni Tommila) holds everything together in the most verbal performance of the picture. In the end the concept and visual execution probably was a little stronger than the plot, but for a bit of anti-holiday cheer in a genre wrapper, it’s almost as much fun as it sounds.  Just beware of one full frontal older elf nudity scene taking place in a communal shower.  That may be one of the most haunting images you’ll see on screen this year. It can make you flash back to time spent in a YMHA locker room you’ve been trying to forget for 25 years. Or so I’d imagine…