Chosen Film: Let Me In 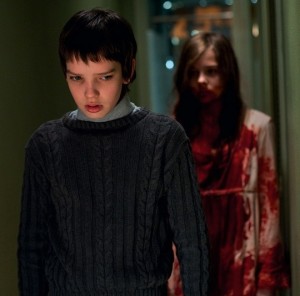 Let Me In is an American remake of the 2008 Swedish film Let the Right One In (based on a book of the same name).  The framework of both movies is the same: a young boy with rage issues becomes friends with a 12 year old girl at his apartment complex who just happens to be a vampire, and not of the sparkly vegetarian variety.  The mash-up of the coming-of-age, revenge and horror genres produced an unusually awesome film; scary, sweet and thought provoking.  The new version is a solid film, but not as strong as the work on which it was based.

Owen (Kodi Smit-McPhee) lives in a nondescript apartment building and suffers under the constant threat of physical bullying by classmates.  He hangs out by himself most of the time, playing with his Rubik’s cube, eating Now and Later candy and occasionally acting out a fantasy of stabbing his tormentors with a pocket knife, which is alarmingly similar to my own childhood.  He meets Abby (Chloe Moretz) who has just moved into the building with a man that appears to be her father (Richard Jenkins).  They slowly strike up a relationship,  while her father comes and goes, hunting local youth and draining them of blood in the woods.  We realize Abby is leading Owen down a dark path.  The film is a reminder that love can lead you to do some seriously messed up things.

Director Matt Reeves hones his gaze in on the young “couple” eschewing some of the community background found in the original.  The American remake loses the nuance that made director Tomas Alfredson’s film so memorable. Notably Reeves has gone out of his way to make Abby more visually evil – changing her appearance as she becomes overtaken by blood lust. This actually makes her less scary as we’re no longer as shocked to see the sweet little girl moving to tear out someone’s throat.  Regardless, Let Me In will likely yo-yo your emotions between rooting for Owen and Abby vs. being aghast with what they’re actually doing. Which is part of the fun.

Those new to the story (and not afraid of some blood) will likely have a bang up time with Let Me In.  If you’re one of those who later seeks out the original on DVD, you’ll find that lower budget doesn’t always mean lesser result.