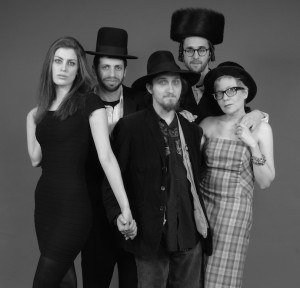 Eve Annenberg is someone I would lovingly call a nudnik. After inviting me up to her midtown apartment, she was wholly unsettled that I wouldn’t accept any of her beverage offerings. “Coffee? No? I’ve got tea. Is it a kosher thing? Alcohol?” I just wasn’t thirsty. “It’s a Jewish thing; I just have to give a guest something.”

I came to talk to her about her new film, Romeo and Juliet in Yiddish, which will have its New York Premiere this weekend as part of the New York Jewish Film Festival. She has had one of the most heartbreakingly remarkable years, this past year. She fought (and beat) breast cancer, buried her mother, and found time to go on a creative exploration with a small band of Orthodox Jews.

A little over a year ago, Annenberg found herself going to Chulent dinners, a New York gathering of young Orthodox Jews, mostly those who have left tight-knit communities.

“When I was growing up, the only people I knew who spoke Yiddish were old, my mother and my grandmother. I saw these young kids speaking Yiddish and I was excited by it. I just found it thrilling on some primal level. It was crazy”

Shakespeare came to mind almost immediately for Eve, zeroing in on “Romeo and Juliet” as she noticed themes of arranged marriage and unrequited love had certain parallels to the lives of today’s Orthodox youth.

“And then I realized that most of the people in this crowd had never even heard of William Shakespeare let alone know the story of Romeo and Juliet. That was mind blowing. They don’t English literature or romance at their schools. For the academic in me, it was totally gratifying to find this audience discover Shakespeare for the first time. So I started to translate it with some people.”

The rest is history. Annenberg set out to make the film with her own funding, but eventually got a nice sum of money dropped in her lap to finish it off. What she assumed would be three years of shooting on weekends turned into eight months from script to screen, and that first screen was at the Berlin Jewish Festival, where the film picked up an audience award after one sold out screening.

Leaning into my recorder, Eve gets a little serious for a fleeting second. “Since this is Heeb, can I say what I need?” I had no idea what the hell she was going to do. “I need nine hundred thousand dollars, Mr. Spielberg.” Then she upped the ante with a poem that should stick in the head of any listening funder. “What I couldn’t do with a million two.” To be clear, Eve doesn’t just want money; it happens to be the lifeblood of her creative endeavors. Though she wouldn’t name any of them, she appears to have several projects swirling around both in her head and on paper. Though this is her first feature since the 1996 Dogs: The Rise and Fall of an All-Girl Bookie Joint, she is ready to jump back into directing head first. Time will only tell what’s next.

Romeo and Juliet in Yiddish will have it’s New York Premiere on Sunday, January 16th as part of the New York Jewish Film Festival. For more information, visit the film’s official site.