Chosen Film: _Within the Whirlwind_

In the long tradition of depressing films by and about Jews, director Marleen Gorris presents Within the Whirlwind. Based on Evgenia Ginzburg’s memoirs, this film shows the Jewish poetess suffering, starving and falling in love at a Russian gulag. (The "falling in love" part actually helped her survive, but more on that later.)

Though Whirlwind is Ginzburg’s personal journey, it gives a clear picture of brutal Stalinist Russia. Ginzburg (played by the amazing Emily Watson from Breaking the Waves) was a loyal member of the Communist party and a happily married professor–a harmless intellectual–but Stalin’s paranoia sent many of his country’s best and brightest off to Siberia. Accused of conspiring with a Trotskyist organization, Ginzburg was sentenced to a decade of forced labor. The grim, gray cinematography evokes the hopelessness of a hard winter and withering illness. You can feel the chill.

Even covered in rags and grime, Ginzburg attracts the camp doctor, Anton Walter (Ulrich Tukur). Discovering love in a place of despair would strain any film’s credibility, except this happened in real life. Watson and Tukur, both nuanced actors, create a fragile, warm tenderness that co-exists with all the hurt and terror–a complexity only gifted performers can achieve. 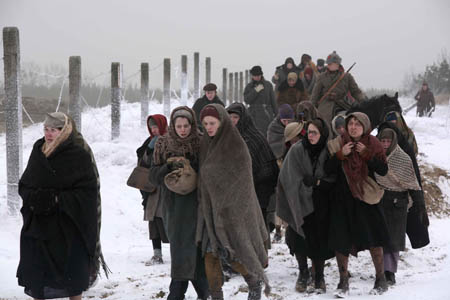 No, Whirlwind is not the year’s "feel good" flick, but it’s thoroughly honest about this history and the scars it left on those lucky enough to survive. That said, the love story seeps in those jagged cracks, leaving me with a fuzzy feeling. You could even say Whirlwind is even somewhat . . . well, definitely not upbeat, but possibly uplifting. For a Jew film as depressing as this one, that’s pretty amazing.

Within the Whirlwind will be screened at the Walter Reade Theater (Lincoln Center) as part of the New York Jewish Film Festival on Wednesday, January 27 at 1:00 p.m. and Thursday, January 28 at 3:45 p.m. and 8:45 p.m.