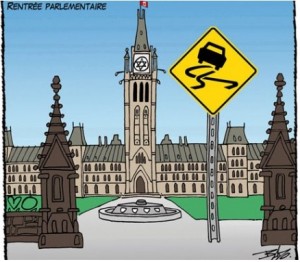 Political cartoonist Guy Badeaux of the Canadian newspaper Le Droit has been accused by the executive vice-president of B’nai Brith Canada, Frank Dimant, of drawing an anti-semitic cartoon (pictured at left). Badeaux claims that he tried to recreate the intricate star design on the face of the clock and never intended to draw a Star of David. The artist has no history of anti-Semitic behavior and has spoken extensively in synagogues as well as worked with the Quebec Jewish Congress and Quebec-Israel committee.

Perhaps Dimant would be wise to take it down a notch given Badeaux’s sterling reputation in the Jewish community. Hockey’s in the off-season and Canadians are restless, but does that justify Dimant’s criticism? Is he scouring all cartoons for hidden stars of David? (Is that a Star of David on Marmaduke’s collar?) Come on, Dimant. Lighten up!