At this point, we’ve all become fairly immune to the hubbub that occurs each time a celebrity yawns, rolls out of bed, and says to themselves “well, I guess it’s time to join twitter?” Ordinarily, who cares? BFD. But, sometimes a celebrity – no, an icon – no, a living legend  (okay, a celebrity) manages to wake us from our ennui stupors to remind us that, yes, we can still get excited when someone big and famous reduces their output to a mere 140 characters in an effort to keep with the technological times.

And so we give a big Heeb-y welcome to Mel Brooks (@MelBrooks), who joined Twitter last night, and has already amassed nearly 16K followers (Not bad for someone on the far side of his 80s). Mel took the technological leap to plug (of course) his appearance at Comedy Central’s twitter-based “#ComedyFest” 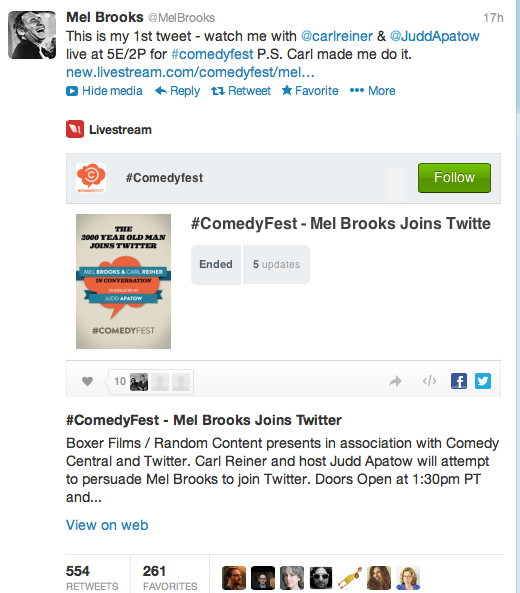 Missed Mel last night? No worries – You can watch his chat with Judd Apatow, and longtime partner-in-crime Carl Reiner, here:

So far it looks as if Mel is leaving his twitter account to that single act of self-promotion, but who knows? The guy’s gone the full EGOT, winning every major award offered in the performing arts – Can a Webby be that far off?