About That Blackface Purim Costume…

You see, while most Purim partiers keep their costumes within the realm of “silly revelry”, Assemblyman Hikind went another route. As host of a purim party in his Brooklyn home, Hikind spent the holiday dressed as a Basketball player. Sounds innocuous enough, until you realize that for Hikind, “a Basketball player” mean a jersey, an afro wig, and a layer of blackface makeup. As reported by Politicker, a professional makeup artist was used to transform the 62 year old Brooklyn assemblyman into this morning’s “Are you fucking kidding me?” headline. 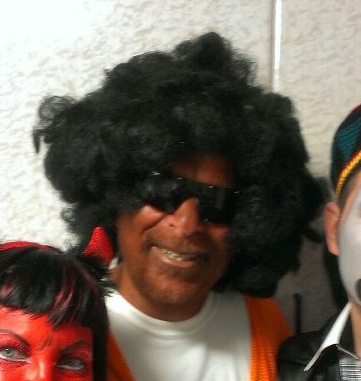 Hikind, a longtime powerhouse in local New York politics – particularly within Brooklyn’s orthodox Jewish communities – is no stranger to being on the wrong side of controversy. The conservative Democrat lobbied the NYPD to begin a policy of racial profiling, and recently came out against same-sex marriage, for fear that it would lead to incest. And then there’s Hikind’s involvement in Meir Kahane’s Jewish Defense League, an FBI-listed terrorist organization which, while famous for its anti-Arab incitement, spent its early days agitating Black Panther groups in New York city. How charming.

So, given Hikind’s past associations, and Brooklyn’s… er…less than stellar history of Black/Jewish relations you might think an elected official in the area would have a modicum of political acumen (to say nothing of regular human decency) and realize that dressing in blackface might not go over so well. Think again. When asked by Politicker whether he was worried his costume might offend, Hikind replied:

“I can’t imagine anyone getting offended. You know, anyone who knows anything about Purim knows that if you walk throughout the community, whether it’s Williamsburg, Boro Park, Flatbush, Forest Hills, Kew Gardens Hills, people get dressed up in, you name it, you know, in every kind of dress-up imaginable…. Purim, you know, everything goes and it’s all done with respect. No one is laughing, no one is mocking. No one walked in today and said, ‘Oh my God.’ … It’s all just in good fun with respect always, whatever anyone does it’s done with tremendous amounts of respect and with dignity, of course.