And so it happened after a couple of lesser surgeries and treatments that my trusted medical advisers recommended mastectomy.

I made decisions, second-guessed the decisions, reaffirmed the decisions, called my mother, broke the news to my kids, woke up pleading for pain meds, suffered the various indignations of a hospital stay, and am now in the comfort of my own home wondering what the hell happened. I look like I got bitten by a purple-toothed alligator, plus I have tubes and drains coming out of my armpits and abdomen. My daughter thinks I look like a stitched-together puppet, and that’s not even the cutest thing she’s said, but it hurts to chuckle so I’ll save the highlight reel for later. I’m also not going to complain too much because a) I’m alive, b) my prognosis is excellent, and c) I’ll be getting liposuction in a few months paid for by my health insurance! Cancer truly is a blessing, y’all (to be clear: that was me at 100% sarcasm).

I do have one irrepressible gripe, though: Ishiguro’s The Buried Giant was on the top of my recovery-reading pile, but in my lingering fog of anesthesia and narcotics I’m afraid to open my favorite novelist’s latest. I’m borderline narcoleptic, conjuring dreams of losing my shoes and finding mismatched pairs simply by closing my eyes. I want to be present, you know? Which isn’t to say my list this week is lesser. Let’s call my choices more straightforward, with more-reliable narrators, narrower plot leaps. And revolving around a theme—not cancer, mind you, and not World War II, either, even if it may seem that way at first. 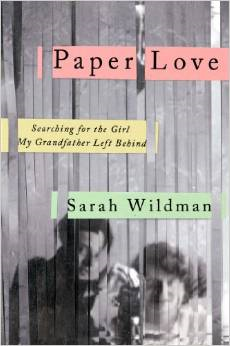 Paper Love: Searching for the Girl My Grandfather Left Behind by Sarah Wildman

This memoir/biography is as much about the author’s investigation as it is about her subject: The girlfriend her grandfather left behind when he escaped the Nazis to America. I’m tempted to argue that Wildman’s family bias causes her to miss some layers in the girlfriend’s letters. But I just dozed off and imagined I was trying to hang two flowers on a wall in blinding sunlight; I’m not up for stating a thesis and citing the evidence. Wildman proves that third-generation Holocaust survivors have a worthy angle, and that an ending seen coming can still manage to knock you out. 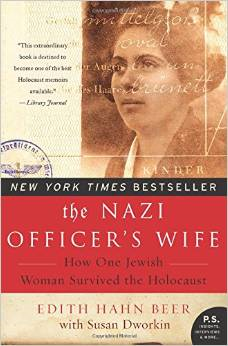 The Nazi Officer’s Wife: How One Jewish Woman Survived the Holocaust by Edith Hahn Beer (with Susan Dworkin)

This is a reissue with minor additional material, but whatever, it landed on my desk last month on the day I had to lie face down in a MRI machine perfectly still for an hour while undergoing a needle biopsy.

Beer, a Viennese Jew, didn’t merely borrow her friend’s name to hide from the Nazis by marrying one of them – She subsumed her entire higher-educated, culturally-literate identity in order to play the perfect, dutiful wife. She turned down painkillers when giving birth for fear of accidentally letting slip the truth. Now, they don’t call it a vacuum-assisted biopsy because it’s quiet and peaceful, and I didn’t mention the part about my breast being squashed the whole time mammogram-style, but in retrospect it was nothing. Even my present post-mastectomy pain—friends are calling me resilient for getting out of bed this morning. Let’s remember that I have an Oxycodone prescription, the freedom to speak my mind, and that at the moment I’m lazing on my sofa partaking of both. Beer had a few good years as a judge after the war, but her husband couldn’t deal with her feminism, and then the Russians wanted her to inform. She wound up starting over in England as a housekeeper—that’s resilience, people, the fallopian-tubed epitome of it. 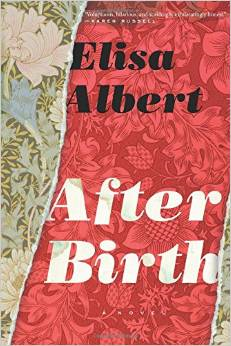 I should have read After Birth before the Holocaust memoirs because it’s so exquisite it’s backfiring: A novel about postpartum depression dressed as a rant against modern motherhood, or maybe vice versa, it walks the line between railing and wailing so deftly that I want to burn every sentence I’ve ever strung together. Protagonist Ari rebuilds her self-esteem by befriending a woman she admires while my authorial self-esteem withers word by word. Other than that, though, Albert’s third book is ideal recovery reading. It’s a page-turner without requiring close attention to a plot (a compliment of the highest order), and Mommy blues and boob tumors have a lot in common: They’re hard to detect in their early stages, they get equal parts minimized and sensationalized in the media, and they rain down positivity bullshit upon their sufferers. As a person prone to melancholia, after After Birth I feel restored as a female warrior. Just not like much of a writer. Oh, well, we can’t have it all.