(This is the extended Geddy Lee interview, continued from "A Show of Hands" in Heeb‘s Spring Edition, the Music Issue.)

I was a quiet nerd. I got into music when I was 12 and I was listening to the radio intensely. [I was] listening to other bands and [became] a pretty fanatical rock fan. I wanted to learn how to play so I started learning. I was motivated. One of my favorite rock memories as a kid…I remember seeing Cream when they came around—nobody wanted to go with me, so I bought a ticket and went on my own. In a lot of ways, Cream inspired me to do what I do.

When I was a teen, I tried skipping out on the family Hanukah party to see Rush at Madison Square Garden. I got grounded and missed your show.

Getting busted on Hanukah? Wow. Your parents were strict. I’ll have to do another tour to make it up to you.

What about your parents? What did they think about their son ditching the traditional life for that of the rock star?

It was very hard on my mother at first. She wanted [me to be] a nice Jewish boy from the suburbs and didn’t understand what I was doing at first— [she thought] that maybe I had lost my mind to quit school and run away to join a rock band. But when she first saw me on TV she understood my role as an entertainer.

The incredible thing about Rush is your collective organic dynamic. You sing the lyrics that Neil [Peart] writes—is it important for you to make an emotional connection to his words when singing them?

It’s a good question. Our relationship as a songwriting team has evolved over the years—his being the lyricist and my being the vocalist—there needs to be consideration on both sides. As we’ve grown up together, there’s been a progressive increase of that consideration. He’ll put five or six song ideas together and leave it to me to choose the ones that hit me on a positive level and the ones that don’t…they’ll be put aside. Neil gives me complete latitude over the lyrics like an editor, and if I’m not feeling the chorus, he’ll try to reconstruct, and we’ll have a back-and-forth until it works or doesn’t. Other times, I won’t touch a song and I’ll be blown away by it. In the same way that he’ll hear me sing the songs and give me feedback on how I’m singing it. Overall, though, we don’t argue—we just discuss.

Which songs from your catalogue do you relate to the most?

There are two specific songs on Roll The Bones (1991) that really get me—one of them is â€˜Dreamline.’ I love the spirit of that song and the way Neil captures that feeling of wanderlust and invulnerability that comes in a particular trying time in your life. The other song is â€˜Bravado,’ a totally romantic song and also an encouraging song about not holding back and being brave. I think going out on a limb and being contradictory to your inherent personality is a huge thing to do. Maybe that’s why I feel connected to that.

The physical act of touring has its ups and downs, for sure. But do I love to play? Yeah. Do I love to play with the two other guys? Yeah. Those three hours that we play together, I have a blast. Everything else is a grind—schlepping all over the country, keeping myself in mental and physical health…those are the things I have to deal with during these 150 years of touring.

Do you think of yourself as a prog rock musician?

Our history runs the gamut and we began as a prog rock band with long extended pieces— sword and sorcery piece—which is pure prog. I’d like to think that we’ve evolved since then. Rupert Hines once called us a â€˜post-progressive rock band,’ or p-p-rock.

Everyone is in the band is an exceptional musician. Neil, in particular, is a certifiable drum god…

I’m constantly blown away by Neil’s drumming and Alex [Lifeson’s] ability to be a lead and rhythm guitarist at the same time.

You play both the bass and keyboards. That’s nothing to laugh at.

You know what they say: â€˜Jack of all trades, master of none.’

Has Rush ever considered hiring a keyboard player to tour with you guys? Alleviate Geddy’s workload?

It’s always a discussion, and every time we go on tour, we’re like, â€˜Nah, we can’t have another guy on stage.’ It wouldn’t ruin the chemistry. But when we go into the studio to record, I realize all the extra crap I have to do on stage and I bring up the possibility again.

Have you ever felt that the songwriting well was drying up? After all these albums…

Yeah, there are lots of times when you feel dry and uninspired. You have two choices: keep playing until something good comes out, or take the day off and read a book or something. We can force ourselves to write something—to keep jamming under forced circumstances. That’s part of being a professional musician. We like to spend a lot of time with songs to give ourselves some objectivity. If the song’s no good, we throw it out.

Okay, now for some nerd-boy questions. I was watching a cameo that you did recently for a Broken Social Scene video, â€˜Fire Eye’d Boy.’ Do you still keep up with the bands emerging from the burgeoning Canadian music scene?

My attention to those things definitely comes and goes. I’ve been on tour for the last two years, so I can tell you that right now I’m completely out of touch with the scene. I can go out and check out some new bands at a local venue, but I rarely want to. But those guys are pretty popular around here. I had fun doing that video.

I’ve always wanted to know about this one: Do you know the Pavement song â€˜Stereo’? That one line—do you know it? (The lyrics read: â€˜What about the voice of Geddy Lee/ How did it get so high? I wonder if he speaks like an ordinary guy? I know him and he does!’)

Oh yeah. People ask me about that song all the time. I love it. I get a chuckle out of it.

You have a really good sense of humor about yourself, recently appearing on The Colbert Report, the South Park movie…

I don’t know. People assume that I’m a serious guy. But I think its important not to take yourself too seriously.

An obscure piece of Rush trivia is that you guys performed with Aimee Mann on the song â€˜Time Stands Still.’ How random is that?

Yeah. When we were recording the song, I heard a female voice singing that line. We talked about Chrissie Hynde, but then our producer suggested Aimee Mann, who, at the time, was the singer of â€˜Til Tuesday. She was very generous with her time and a terrific artist. A lovely voice.

What are you reading now? I read a lot on the road. The latest book by Paul Theroux—he’s one of my favorite travel writers. Also, I just finished a book by Neal Karlen called Slouching Toward Fargo. 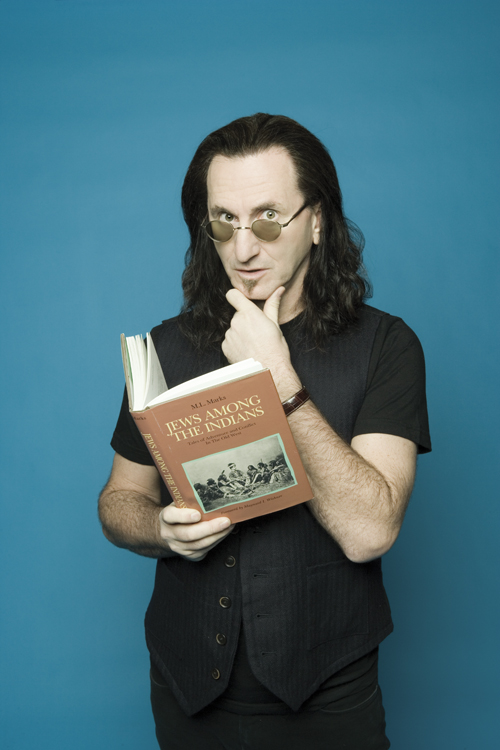 No science fiction or fantasy books? [Laughs] I haven’t read any sci-fi in quite some time actually. My favorite book of the year is What Is the What. An exceptional book. Dave Eggers is totally cool—I like his writing a lot.

â€˜Nobody’s Hero,’ a song from the 1993’s Counterparts, felt out of left field for Rush, dealing with AIDS and homosexuality—â€˜I knew he was different in his sexuality/I went to his parties as a straight minority/It never seemed a threat to my masculinity.’

It dealt with the loss of people from terrible circumstances, and that song hit people, I think, in a different way. The kind of issues we dealt with in that song is not pop song stuff, granted. But that’s what makes it so distinct.

Why do your fans come to Rush shows?

We have an incredibly diverse appeal— I’d like to think. Some fans are strictly technical fans geeking out on the drummer, or the weird chord formations. There are other fans that have felt a connection to the spirit of our song—the way they resonate thematically, a more emotional appeal. You can have two Rush fans sitting side-by-side listening to different aspects.

What’s the secret behind maintaining a relationship with three guys for three decades?

You have to be able to make fun of each other and do that ad nauseam. Between the three of us, people’s feelings rarely get hurt. We’ve been through so much together, so we have the comedy, and that keeps us going. We’re all for more comedy, less music. That’s a big part of the glue.

How much longer can you keep doing this?

It’s a question I asked myself all the time, but now I don’t. Now I go with the flow. The day that we can no longer squeeze a new idea out of these old bones that’s the day I pack it in.