Sure this 3D Printed Yarmulke Exists, But Why?

Growing up, my family had an entire drawer in their living room dedicated to those cheap nylon yarmulkes that synagogues leave out for those who didn’t bring their own. There must have been dozens – certainly more than 50. Maybe more than 100. We had them all: Black ones, white ones, and occasionally a nicer, double-layered one with gold script printed inside to announce that this particular yarmulke had come from Temple Beth Israel’s bar mitzvah of Jonathan Olstein in 1993. 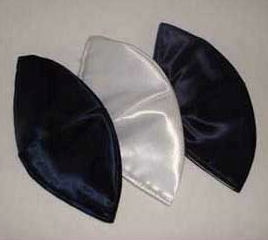 an entire drawer of these

It’s not that we hoarded them, per-say. It’s just that, on the weeks we would actually attend synagogue, my father would inevitably forget to bring a yarmulke of his own, and would be forced to erm…”borrow” one from the seemingly endless reserve the synagogue offered, only to stuff it in his jacket pocket the minute services were done. Week after week, we’d arrive home, where my father would pour himself a shot of whiskey, reach into his jacket pocket, and – wincing – exclaim “Aw shit!” at having found yet another crappy yarmulke he’d forgotten to return. So, into the drawer it would go, to join its crappy nylon brethren and never to see the inside of a synagogue again (Actually, that’s not true. One year my mother, so annoyed at having given up an entire desk drawer to the exponentially growing number of yarmulkes, forced my father to bring all the yarmulkes, all at once. We drove to my cousin Joel’s bar mitzvah with a grocery bag full of of them, my parents spending the better part of the car ride over arguing whether they should bring the yarmulkes in themselves, or just leave them at the door of the synagogue like an abandoned baby on the steps of an orphanage.)

I bring this all up to highlight how totally unnecessary the invention of 3D printed yarmulkes actually is.

Thanks to University of Waterloo professor Craig Kaplan, the world of low-grade, mass-produced religious head-coverings has exited the drawer in my parent’s living room, and entered the 21st century. 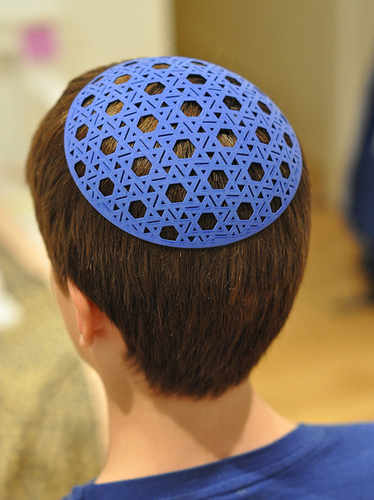 [Kaplan] rarely leaves the house without his Panama hat in warmer weather.

He wanted to design a 3-D printed version of the traditional hat, but he decided to start with an easier shape to reproduce: a yarmulke, or kippah — a plate-shaped head covering worn by observant Jews.

“After that,” he says, “it was just a matter of working through the mathematics — programming and 3-D modeling to make these kippah designs a reality.”

Let’s get this straight. My folks had dozens of these things already, and now this guy brings math and computer programing into the mix? For what? Is there really someone who is that keen on wearing skullcap but would rather print their own using “laser-sintered nylon” instead of “borrowing” one from their local synagogue? I don’t buy it. Given the over-abundence of cheap yarmulkes already taking up valuable space in our nations desk drawers and jacket pockets, what’s the point of trumpeting this new and exciting way to 3D print clutter?

From a design point of view, [Kaplan] says, 3-D printing has the advantage of producing a nearly infinite variety of interesting geometric designs in a way that might not be possible with, say, crochet.

I was the king of the puffy-paint yarmulke craft day in Hebrew school. Don’t come at me like your yarmulke, with its geometrically perfect Jewish stars, comes even close to the Ghostbusters logo I put on mine in 3rd grade. That was a work of fucking art.

Look, if you’re the sort of person who’s really that desperate to rock a yarmulke, don’t bother with 3D printing and laser cutting –  just ask my parents. They’ve got a plenty.