What’s Wrong With You: Kosher Tax Fraud, Trayfe “Everything Else” 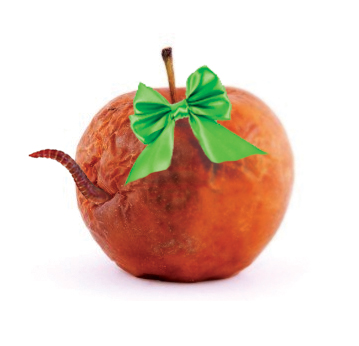 My father gave me a really expensive gift for my college graduation, something I’ve wanted for a really long time.  Two months later, when it was too late to return the gift to the store, he told me he planned to deduct it as a business expense on his tax return.  Did I mention he’s a Rabbi?  Anything that a synagogue might use, he figures he can claim to have bought for it out of his own pocket.  I’ve always known he does this because he boasts about it (to select people, obviously), but this is the first time he told me straight out he was doing it with something he bought for me.

My impulse is to return the gift to him, as much as I hate to part with it.  But what’s most likely to happen if I do that is an ugly scene that winds up involving my mother and siblings, and ends with my father promising me he won’t deduct it “if that makes me happy”.  He’d be lying, obviously, but I can’t exactly ask to see his tax return.  I can’t ask my mother about it, either.  I’d have two choices:  keep the gift and look like a hypocrite (which I guess I would be), or still refuse to accept it and look like the bad guy.

So is it worth saying anything in the first place?  I don’t have any money to give him or send to the IRS.

I’ll give you credit for not hiding behind the fact that “Honor Thy Father and Mother” is several commandments ahead of “Thou Shalt Not Steal.”  But let’s not pretend you were ever serious about returning the gift.

If you want to let your father know what you think — instead of worrying what he thinks of you — start by being honest with yourself.  You aren’t comfortable with his accounting practices.  You’d prefer he apply the generally accepted ones where it pertains to you.  Even if that means receiving less extravagant gifts?

Then take your distilled morality to Rabbi Dad like a congregant humbly seeking his counsel.  I’m betting Rav Pop doesn’t take well to anything that smells critical, but if you appeal to one of the animals feeding his ego — his wisdom, magnanimity, superiority —  you’ll allow him to rectify the situation and feel good about himself for doing so.  He wants to be admired, and if his tax fraud isn’t achieving that, then maybe his readiness to accommodate you or his brilliant workaround solution will.

Yes, he’ll probably lie about his intentions for the receipt.  And you’ll have done your present best with a modicum of integrity.  You’re human.  Try again when you’re independently wealthy.  Have you considered law school?

My boyfriend wants me to have sex with his best friend while he watches.  His friend is actually hot so I’m into it, but the problem is he isn’t Jewish.  I know it’s odd for me to be worried about that under these circumstances, but I’ve always drawn a line at dating non-Jews.  I’m afraid if I sleep with one it will be a slippery slope to dating and falling in love with one.  Am I even making sense?  Or do you think I’m just displacing my nervousness about never having been in a three-way before?

Since you’re already thinking ahead (wisely; see below) to whom you might fall in love with next, I’m not sure why you’d even consider such a significant compromise for the guy you’re currently with.  It doesn’t matter if you’re being rational, either, because irrationality won’t talk you down from your regret.  The only positive outcome I can imagine to the cuckolding you’re contemplating would be if it did in fact lead you to fall in love with a non-member of the tribe, and one of your children with him grew up to cure cancer.