A cousin got married this past weekend in my hometown, and my fiancé and I were allowed to sleep in my old bedroom together so that other rooms could be given to other wedding guests. Growing up, my Modern Orthodox, right-leaning parents were pretty strict about even letting me date, so despite their ulterior motives, this was a huge step for them. And no way was I going to ruin it by having sex in their house and risk making noise. My fiancé completely understood. My father, on the other hand, made what he thought was a joke about having heard the bed squeak. My boyfriend was shocked and I felt violated. What’s wrong with my father?

Daughter of a Pervert Prude

Pervert Prude fairly sums it up. Before I elaborate, though, YUCK! And kudos to your for landing a man with the sense to be shocked. Your father’s former strictness and his power-flail of a joke scream–through a megaphone–discomfort with the idea of his daughter having premarital sex. Hopefully he’ll be OK with the married version, but that won’t detract from the fact that he’s thinking about your vagina way too much. He certainly shouldn’t be dwelling on it, and audibly commenting on what you do with it defies explanation. If he was trying to bond with your fiancé, the explanation defies explanation. The only glimmer of non-hypocrisy here is that he didn’t wait to crack his quip until you were out of the room.

Dad has boundary issues, an outmoded view of sex, a dirty mind, stunted maturity, and he’s probably more right-wing than right-leaning. And yuck all over again.

More on adolescent men afraid of female sexuality below….. 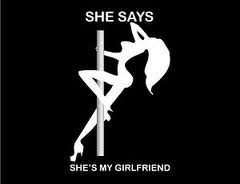 ….which makes me special enough to wear this on my shirt.

My new boyfriend is great: intelligent, motivated, honest and respectful of women–or so I thought. Recently he brought me to a birthday gathering for one of his co-workers, and the guy he spent most of his time talking to when we weren’t together (he didn’t ignore me) was a former boss of his. Who was wearing a T-shirt from a topless bar, cartoony silhouette of idiotically-proportioned stripper spinning around a pole and all. I could barely stand next to such a clueless jerk, but that’s who my boyfriend kept going back to. When I asked him afterwards, he laughed, acknowledged that the guy had “issues”, and shrugged the matter off. I don’t want to fault him for networking with a powerful (sort of) contact he hadn’t seen for a while. But my mind refuses to let go of this: is my boyfriend’s ability to tolerate a shirt like that a sign he might have “issues” of his own?

Geez, the boss couldn’t just proclaim his refined taste with a little alligator, or whatever’s the height of his price range, over his heart? His coolness with an image of his favorite band? His altruism with a bold term around a parenthesized “red” (applied to the fabric in a sweatshop)? After death, illness, hunger, violence and poverty, I can fathom nothing sadder than a grown man wearing a chest-billboard advertising his insecurity, propensity for rescue fantasies, and lack of women willing to undress for him at home. Truly sad, except I don’t feel bad about looking the other way.

That your boyfriend had been burnishing connections doesn’t absolve him of brushing you off. I’m also concerned that he laughed instead of, say, shaking his head in disgust. The real question, though, is what he meant by “issues”–misogyny issues, fashion issues, or simply dress-code-for-business-socializing issues? Best-case scenario: BF felt conflicted about brown-nosing and chuckled to cover it up. Instant-breakup scenario: He thought Mr. Macho was genuinely funny and got the name of his stylist. Somewhere between these two un-shiny, non-spinning poles lies your man. Don’t drop your shovel so quickly the next time you see dirt.