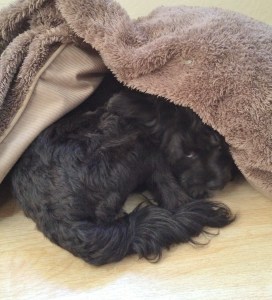 Boyfriend and I recently moved in together and adopted a puppy. Boyfriend doesn’t mind puppy in the room with us when we have sex. I don’t enjoy being barked at. I also feel bad because puppy is neutered and it’s like we’re rubbing it in (excuse the pun). Boyfriend thinks I’m nuts and that shooing puppy out spoils the mood. Is this a battle worth fighting?

Signed,
Not In Front of the Dog

Dear Not in Front of the Dog,

Strangely, I can’t think of a single play on the term doggie-style that’s worth using. Petting, fur…. nothing. I guess part of me just doesn’t want to go there. Anyway, let me reframe your question: is your sexual comfort-zone worth defending? Duh, and here are your personalized top two of the multitudes of reasons:

1) Not wishing to hear panting from the observation deck while you’re pantslessly panting isn’t “nuts”. It’s “not needing attention from any available source” or “not seeking to establish dominance”—the opposite of whatever kick your boyfriend secretly gets out of performing for a pooch. Sorry to be the bearer of that news. Don’t worry, though, it’s probably harmless; my point is that he shouldn’t be feigning indifference. Which brings us to:

2) When a guy complains about a two-second anticipatory pause ruining the moment, he’s not sweating the delay. To wit: Drawing shades, removing stilettos, putting on condoms, these are commonly claimed to have detrimental effects on the same testosteroney libido that gets revved up by the sound of a beer can opening. Seriously? Watching you stroll naked across the room to open and shut the door will deflate him?

Until he’s ready to be honest about his stance, simply remind Mr. Alpha Male that your mood matters, too. Now please excuse me while I meditate away this image of a couple going at it while a dog auto-fellates at the foot of the bed. 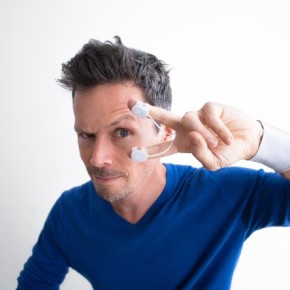 I’m a twenty-seven-year-old guy who lives next door to a recent divorcee in her late thirties. I received a package that was meant for her, but I didn’t realize that until I opened it. Normally I’d just go give it to her with an apology, right? But there was [NSFW warning:] this inside the box. I don’t want to embarrass her, but she’s hot and I could use this as an opening to hit on her. Is that a totally lame idea?

Yours,
The Boy Next Door

I regret to inform you that life unfolds like a porn film pretty much never. You should also be informed, just in case, that the only thing buying a sex toy tells you about the purchaser is that they don’t eschew sex toys. Have you considered that perhaps your neighbor plans to enjoy the gadget with her new lover? Or that her ex may have been so awful she’s done with men for a while? Scratch that, you probably did consider it, as it opens the role of the stud who changes the reluctant lady’s mind. Here’s a more plausible scenario: you hand the box over to the post office, approach this woman in an open-ended, reality-grounded manner, and someday tell her what happened and share a laugh. No guarantees, of course, but my way greatly improves your odds.

Let me know how it goes,
Judith

P.S. Your youth isn’t guaranteed to flatter her, either.

[The puppy pictured is mine, other image via]