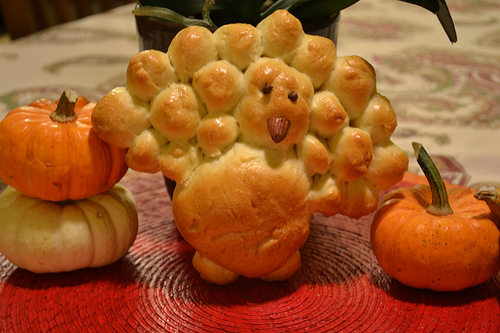 We’re still 24 hours away from Thanksgiving 2012, but it’s never too early to start thinking of next year, right? Apparently not, at least, not for the folks behind Thanksgivukkah. You see, next year Thanksgiving falls on the first night of Hanukkah, and well, “Thanksgiving” + “Hanukkah” = “Thanksgivukkah”. Get it?

For those of you keeping score at home: Thanksgiving is (ostensibly) a commemoration of the first meal shared by Pilgrim settlers and their Native American neighbors. Hanukkah, on the other hand, is (ostensibly) the celebration of the bloody Maccabean victory over an oppressive Greek regime. Similar, right? Similar enough, in fact, that someone absolutely needed to cram these super-similar things into some portmanteau’d turducken of a holiday.

That said, we can’t wait to see the Maccabeats wrap their brains around this Thanksgiving classic…