Let’s return to anti-Semitism for a moment. You’ve written that you don’t perceive anti-Semitism as a problem anymore, at least in this country, since its institutional applications and casual manifestations have basically disappeared. Do you still believe that?
I grew up with anti-Semitism in the United States. We were the only Jewish family in a mostly Irish- and German-Catholic neighborhood [in Philadelphia], which was very anti-Semitic and pretty pro-Nazi. For a young boy in the streets, you got to know what that meant. When my father was first able to get a secondhand car in the late 30s, we drove to the local mountains and passed hotels that said “restricted,” meaning “no Jews.” That was just part of life. When I got to Harvard in the 1950s, the anti-Semitism was so thick you could cut it with a knife. In fact, one of the reasons MIT is a great university is that people like Norbert Wiener couldn’t get jobs at Harvard—it was too anti-Semitic—so they came to the engineering school down the street. That was anti-Semitism. Now it’s a very marginal issue.
There is still racism, but it’s anti-Arab racism which is extreme. Distinguished Harvard professors write that Palestinians are people who bleed and breed their misery in order to drive the Jews into the sea, and that’s considered acceptable. If some distinguished Harvard professor were to write that Jews are people who bleed and breed and advertise their misery in order to drive Palestinians into the desert, the cry of outrage would be enormous. When Jewish intellectuals who are regarded as humanist leaders say that Israel ought to settle the underpopulated Galilee—meaning too many Arabs, not enough Jews—that’s considered wonderful. Virulent anti-Arab racism is so prevalent that we don’t even notice it. That’s what we should be worried about. It’s in the cinema, advertising, everywhere. On the other hand, anti-Semitism is there, but very marginal. 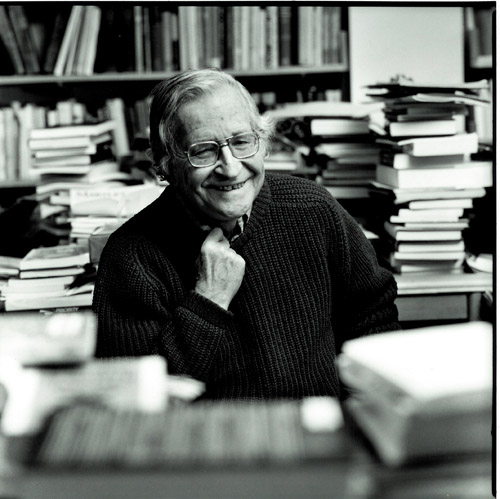 What about recent incidents in Europe and the Arab world? It would seem to involve pretty acrobatic leaps of logic to say that those are not anti-Semitic.

What’s talked about in Europe is something quite different. In Europe, there’s a large Muslim population, and much of it has been driven to fundamentalist Islam. They display hatred towards Jews that is a reflection of Israeli practices. I mean, if you carry out a brutal and vicious military occupation for 35 years, subject the people to humiliation and degradation, break their bones and steal their land and resources, it has consequences. Sometimes the consequences can be quite ugly, and among them is the burning of synagogues in France. Yes, it’s anti-Semitism. But Israel insists on it.
Remember, Israel does not call itself the state of its citizens. The high court in Israel declared over 40 years ago that Israel is the sovereign state of the Jewish people in Israel and the Diaspora. That means Israel is my sovereign state, but it’s not the sovereign state of its Palestinian citizens. Well, if that’s what you declare yourself to be, then you can hardly blame critics of Israeli policy for having negative attitudes towards Jews. After all, it’s my sovereign state—why shouldn’t they go after me? This is one of many respects in which insisting on a state that is fundamentally racist in its basic character, and declares itself to be the state of Jews everywhere, is harmful to Jews. So to call these manifestations “anti-Semitism” is misleading.
Also, we have to recognize that the search for anti-Semitism is a major drive among American Jewish leaders. Take the ADL. I mean, they’re desperate to seek anti-Semitism. If you want to see how desperate, read what they publish. Twenty years ago, they published a book called The Real Anti-Semitism in America. What’s the real anti-Semitism? Well, the ADL recognized that conventional anti-Semitism had basically disappeared. In fact, Jews are the most privileged minority in this country by most measures. But there’s a new kind of anti-Semitism, they said, which is much more serious: opposition to the U.S. military budget. The “real anti-Semitism” is, I quote, “peacemakers of Vietnam vintage who want to undermine the resort to U.S. power throughout the world.” Why is that the “real anti-Semitism?” Well, from their point of view, anti-Semitism [is any] criticism of the aggressive policies of the state of Israel, and those policies can only be carried out with the support of U.S. power. So therefore, if you criticize the U.S. military budget, you’re an anti-Semite.

Speaking of the U.S. military budget, it’s been enjoying quite a resurrection lately. Were our exploits in Iraq, under the since-discredited WMD guise, anything of a surprise to you?
Personally, I expected that there’d be some trace of chemical and biological weapons. If you take a high school in the United States and look in their trash, you’ll probably find evidence that they have the capacity to develop biological and chemical weapons. It’s almost everywhere. So the fact that [the U.S.] couldn’t find anything is pretty astonishing, but not the real point. The real issue is the fakery beforehand. They suppressed questions, qualifications, and emphasized repeatedly what they knew to be very dubious claims in an attempt to drive the population to support a war they had already decided on. There was a massive government media campaign about, you know, the next thing we’re going to see is a mushroom cloud, Saddam Hussein was behind 9/11, and over and over. It was insinuated with such intensity that by the end of September 2002, about 60% of the American population regarded Saddam Hussein as an imminent threat, about half the population thought that there were weapons of mass destruction and that Iraq was supporting Al Qaeda. And Bush continues to repeat that still. He says, without fear of contradiction, that we destroyed a tyrant who was amassing weapons of mass destruction and working with terrorists to destroy us. So yes, a lot of Americans believed that, and the media supported it. This was a conscious effort to terrify the population into support for an aggressive war.
Now, if the media and intellectuals were even minimally honest, they would point out that this had been going on for years. This is the same administration that was in office from 1981-1992, entirely drawn from the more reactionary sectors of the Reagan/Bush administrations. How did they stay in office for those 12 years? Every year they pushed the panic button. One year it was Libyan hit men wandering Washington, trying to assassinate our brave cowboy leader who was hiding in the White House surrounded by tanks. People actually took that seriously. A year later, the Russians were building a military base in Grenada, from which they were going to bomb us. Terrified about that. A year later, Nicaraguan hordes were advancing, only two days driving time from Texas, waving copies of Mein Kampf. In fact, Reagan declared a national emergency in 1985 because, he said, of “the unusual and extraordinary threat posed to the United States by the government of Nicaragua.” Anyone watching this from outside would think this is insane! Nicaragua’s threatening the United States? But that was a national emergency renewed annually, and if you look carefully, that’s approximately what Congress passed in October 2002 about Iraq: imminent threat to the United States. It’s a method of driving people into fanatical fear. It’s second nature to this current administration. They did it the first 12 years they were in office, and they’re doing it now. That ought to be the headline.
The main issue about the failure to find weapons of mass destruction is also being suppressed. It has a very important consequence. The national security strategy in 2002 essentially declared the right to attack any country we’d like, without pretext or authorization, if it possesses weapons of mass destruction which could threaten us. But what happened when they failed to find weapons of mass destruction? They lowered the bar for aggression. So now the story is that Iraq had the intent and ability to create weapons of mass destruction, and that justified it. Well, that’s a significant change in the doctrine. “Intent” is anything you decide. So with that, the new doctrine essentially states that we have the right to use force to attack anyone we want, if we decide that they have the intent and ability sometime in the future to develop weapons of mass destruction that could harm us. You have to look pretty hard to find a doctrine like that in history. In fact, I can’t think of a case. That’s by far the most important consequence of the failure to find weapons of mass destruction.