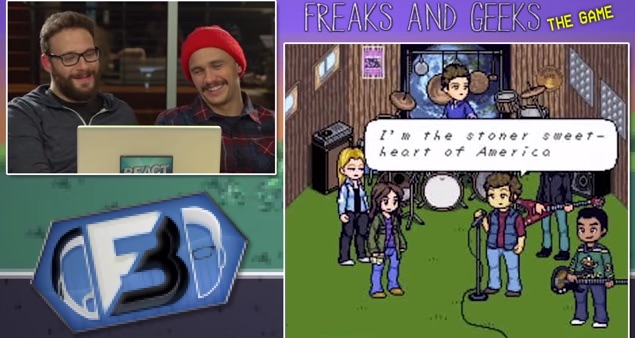 By now it’s a fairly established fact that Paul Feig and Judd Apatow’s all-too-short-lived Freaks and Geeks was – in spite of its run of only twelve episodes – one of the best television shows of at least the past several decades, if not all time. As an loving ode to the friends, family, and growing up freakish, geekish, or both, in the 1980s, Freaks and Geeks launched the careers of some Hollywood’s biggest stars today, including everyone’s favorite non-threatening stoner buds Seth Rogen and James Franco (not to mention our 2008 “Hollywood” issue cover model, Jason Segal)

Now, nearly fifteen years after F&G went off the airwaves, Rogen and Franco are headed back to the show’s fictional town of Chippewa, MI, if not in person, than at least in 8-bit digital form. As part of what I assume is promotional appearances for their upcoming “stoners try to kill Kim Jong-Un” flick The Interview, the two were given an opportunity to play with themselves, and each other, by way of a 2013 Freaks and Geeks interactive youtube game (yes, that’s a real thing that exists.)

The game, by the way, is the creation of internet wizards Rafi and Benny Fine, and is a surprisingly fun, and faithful, recreation of one of television’s brightest, albeit briefest, shows. You can play it (or, at least start to – It’ll jump you to youtube proper after the first part) below: