How Old Hollywood and The Diary Of Anne Frank Created Futurama‘s Dr. Zoidberg. 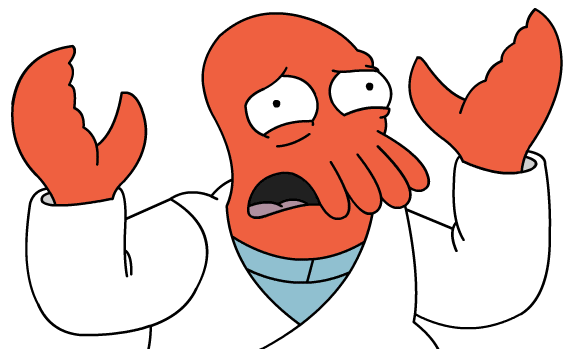 Of all the Jews on television over the last decade, perhaps none has made me laugh quite so hard as Doctor John A. Zoidberg, Futurama‘s semitic cephalopod. Originally conceived as the show’s schlemiel (the one who spills the soup) as well as its schlimazel (the one the soup is spilled on), Dr. Zoidberg became a fan favorite due in no small part to the sheer incongruity of a monstrous space alien who also happens to be a dim-witted, but altogether endearing Jew-ish doctor.

While Zoidberg’s biography is fairly well fleshed out within the Futurama universe, itself (A “decapodian,” he is the nephew of silent holograph star “Harold Zoid”, and once harbored dreams of his own career in entertainment, before his family pushed him toward medicine) the character’s storyboard conception is something altogether different. Played by ubiquitous voice-actor Billy West, there is nothing to indicate that Zoidberg was ever originally written to sound like, as Mel Brooks would say, a “Jew in space.”  In fact,  Zoidberg’s uniquely Jewish affect was created by combining the voices of two of Hollywood’s biggest yids from yesteryear, inspired, in part, by The Diary Of Anne Frank.

During a recent interview on Gilbert Gottfried’s Amazing Colossal Podcast (of which, it has already been established, Heeb is a big fan), West explained the genesis of Zoidberg’s unmistakably Jewish brogue as a mash-up of none other than Georgie “Toastmaster General” Jessel, and Lou Jacobi.

West: He was a marble mouthed idiot, barely funny.

West: Thank you for that. I’m the only one in the world besides [Amazing Colossal co-host] Frank [Santopadre] that… I’m dancing on table tops, sitting up, barking like Lassie over that one. [Jessel] would say (imitating Jessel) “You know the definition of a smart-ass? A fella that can sit on an ice cream cone and tell you what flavor it is.” [Laughter] “Hello mama? Yeah, it’s your son, George… from da money each week!” It’s yiddish humor, a lot of people don’t even know what you’re saying. But, George Jessel – I fused him with Lou Jacobi to do Doctor Zoidberg on Futurama.

Gottfried: Oooh! See, I knew Jessel was definitely there, but I didn’t..Oh! So you put in Lou Jacobi?

West: Yeah, you know like (in Zoidberg voice) “Zoidberg, could be?”

West: But the thing was, I remember Lou Jacobi was in The Diary Of Anne Frank. And God forgive me for saying it. A couple of my favorite comedic stars were in it. It was Ed Wynn as the father, and Lou Jacobi as “Uncle Budi.” [Actually he played Hans Van Daan] I was saying “these are the funniest guys I know, and they’re talking about dead serious stuff like the Nazis and everything.” So they were hiding in the attic and Budi was just grabbing stuff like grain – stealing from the children, like, at night, so he could have more. He was kind of fat. And then one day they caught him and Ed Wynn goes “Here all along we thought it was the rats! And it was you, Budi!” and he just says (imitating Lou Jacobi) “I stole from the children… I stole from the children! I stole [breaks down mumbling]” And I was laughing my ass off and I said “I’m gonna go to hell for this. This is horrible.” But, you know, that’s what happened with Zoidberg. He had all this cool meat hanging off his face and I just said “Why not? Why not be a marble mouth?”

For reference, here’s Jessel, telling a joke about the pope:

And here’s Jacobi, furious they cut the toikey without him.

So there you have it. Starting in old Hollywood and traveling through Anne Frank’s Amsterdam attic, we arrive at Futurama‘s futuristic Dr. Zoidberg.

You can listen to the whole (terrific) interview below. The Zoidberg stuff starts in at around the 26.30 minute mark: