Remember when “celebrity” Tila Tequila announced she was converting to Judaism? No? Because you don’t give a shit what a vacuous waste of space like Tila Tequila says about anything? Good for you. You’re better off for it. But, in the interest of context, here’s what we said about Tila’s semitic swap a few years ago:

vapid fame-whore Tila Tequila’s proclamation that she’s converting to Judaism can easily be seen as the natural cosmic reaction to Matisyahu’s recent split from Orthodox Judaism.

Which isn’t to say Ms. Tequila is going to be diving into Judaism with the same gusto she’s brought to a lifetime of terrible decisions. While she did skip Christmas this year, she admits, “I feel Orthodox is a little hardcore for me at this stage.”

But two years later it seems as if Ms. Tequila’s crazy-pendulum has completed its Jewish arc and is swinging deep into Nazi conspiracy theory territory, instead. Reports Animal New York:

On Friday, Tequila posted a Daily Mail article [EDIT: Presumably AnimalNY meant to link to this] about James Marcus Howe, a director who’d worked on her show and was murdered in his Los Angeles home last month. Her lengthy caption seemed to revel in Howe’s death, and included the text, “GOD SEE’S [sic] YOU DIRTY FUCKING KIKES WORKING FOR THE SYNAGOGUE OF SATAN AND I HAVE RETURNED AS HIS MESSENGER! 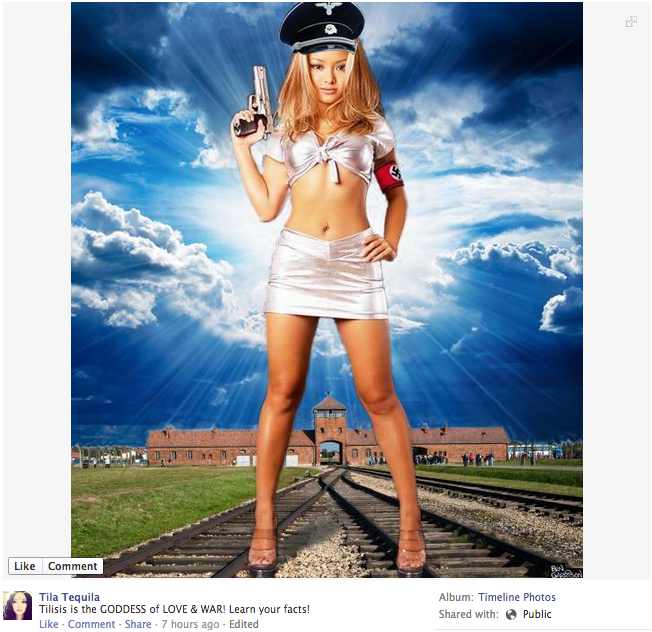 Now, as you might expect, Tila’s wall was almost immediately flooded with people wondering – reasonably – what the fuck is going on here. And, as you might also expect, Tila was absolutely dumb enough to take the bait:

So what is going on here? Shocking imagery aside, this seems to me to be less about Tila being an actual Nazi than it is about her being a completely insane person: The sort of insanity which comes from that special alchemy of chemical imbalance and fame-whoring (Which is pretty much how she gained her notoriety in the first place). It’s hard to imagine Tila Tequila ascribing to the tenets of National Socialism – or any set of beliefs, really – when doing so would require opening a book and/or looking away from a mirror.

Instead, it seems as if the formerly Jew-ish Ms. Tequila has simply fallen down a particularly odious rabbit hole comprised of astronomical self-centeredness coupled with generic conspiracy theories, many of which take on the symbolism and vocabulary of anti-semitism, not out of any actual Jew-hatred, but out of sheer laziness (“Who controls the world? The reverse-vampire lizard people in partnership with the Bilderberg consortium of… Er..you know what? Fuck it. Let’s just say ‘The Jews'”)

So, have fun in crazy-town, Tila. And let us know if you ever decide to become fake-Jewish again.