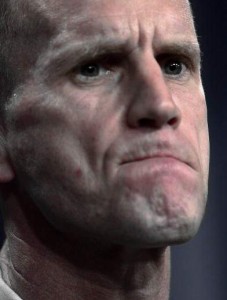 With the posting of Michael Hastings’ article “The Runaway General” at 10 a.m. this morning, Rolling Stone magazine has caused pretty much the biggest political shitstorm a music magazine could hope to ignite–the possible firing of a wartime general. In the article, Gen. Stan McChrystal and his aides mock top Obama officials including Vice President Biden, U.S. Ambassador Karl Eikenberry, Special Representative to Afghanistan Richard Holbrooke and National Security Advisor Jim Jones, who one aide calls a “clown stuck in 1985.”

Not surprisingly, Papa Obama is none too happy about his shit-talking commander, summoning McChrystal to Washington for a time out and to say he’s sowwy. Hopefully, that’s as far as it will go, because as Hastings points out throughout his story, McChrystal is a total badass. Here are my top 5 favorite moments from Hastings that leave no doubt in my mind why we need this crazy SOB in charge of the mess of a war he inherited:

1. He carries a custom-made set of nunchucks in his convoy engraved with his name and four stars

2. In Little League, he would call out strikes to the crowd before whipping a fastball down the middle

3. He accumulated more than 100 hours of demerits for drinking, partying and insubordination – a record that his classmates boasted made him a “century man.”

4. He hates fancy dinners. “I’d rather have my ass kicked by a roomful of people than go out to this dinner,” McChrystal says. He pauses a beat. “Unfortunately,” he adds, “no one in this room could do it.”

5. His itinerary often bears a fresh quote from Bruce Lee. (“There are no limits. There are only plateaus, and you must not stay there, you must go beyond them.”)