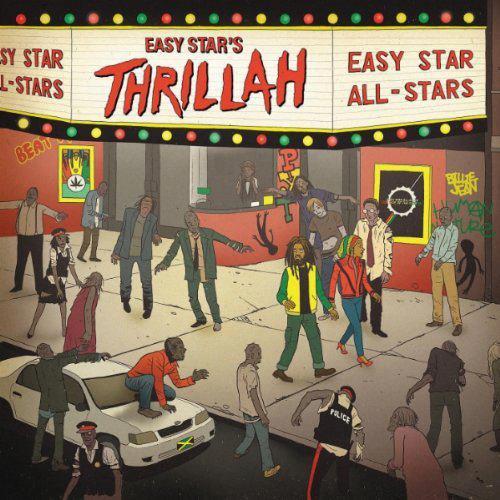 Think back to the days before social-networking allowed everyone to be their own promoter and distributor, before viral videos turned young men into VMA-nominated rappers. Small labels weren’t exactly thriving. But in 1997 the Easy Star reggae label was born, in NYC, founded by the other sons of Zion.

Easy Star’s founding member and producer, Michael Goldwasser has spent 15 years turning a labor of love into an internationally successful business, that has brought the roots reggae sound back into contemporary airplay. Beyond being a platform for reggae acts from the states, Easy Star has turned heads via a series of albums unexpectedly covering of some of rock’s holy-grails: Dub Side of the Moon, Radiodread [OK Computer], Easy Star’s Lonely Hearts Dub Band and most recently, Thrillah, a transformation of Michael Jackson’s Thriller into a dubbed-out wonderland. The Easy Star All-Stars are currently touring the US and worldwide, hitting NYC October 4th at Irving Plaza.

Goldwasser lets us in on what makes the label tick, and what inspired its irie output.

Why start a reggae label?
One of the things we [with partners Remy Gerstein, Eric Smith, Lem Oppenheimer] used to do together post-college was listen to a lot of reggae. Thinking, “Man, what’s coming out now just isn’t it.” Mid-’90s dancehall was great, but we weren’t hearing roots like the sound out of Jamaica from the ’70s & ’80s. There were no American bands trying to sound like Marley. We missed roots with real musicians: no computers, all analog gear and a conscious social message. We decided: let’s do it ourselves. We put our heads together, threw in $1000 each, and did a lot of due diligence and research to get it right.

What inspired the “covers of classics” series?

We didn’t start out thinking about a series.  One of my partners, Lem Oppenheimer, was a big fan of Pink Floyd’s Dark Side of the Moon, and one day in 1999 he was listening to it, and it struck him.  Several years later, when Dub Side of the Moon came out and got a lot of positive feedback, we realized the potential for more.

How old were you when you discovered reggae? What artists influenced you?

I remember hearing reggae when I was in the car with my father – I must have been about 7 or 8 years old, but I didn’t start getting heavily into reggae until I was 14.  Steel Pulse, Third World, Black Uhuru, Bob Marley and the Wailers.  My first reggae concert was Third World and Yellowman at Pier 84 in 1986 and it blew me away.  I was hooked!

Is there a connection between your Jewish heritage and reggae culture on a personal level?

As a person who has been hearing and absorbing Jewish liturgy for my entire life, reggae culture really speaks to me. Rastafari is steeped in Jewish scripture, ideology, and iconography and it was recognizable to me at a relatively early age.  The concept of returning to Zion, the imagery of the Lion of Judah, a concern for social justice – these things were already part of who I was before I got into reggae.  And I’d hear these Bob Marley songs and think, “Hey, I know these lyrics already,” and then I’d figure out that they were taken straight from the Tehillim, the Psalms.  There are many examples of this, and the funny thing is that there are probably a lot of Jewish kids out there who don’t even realize that. These reggae lyrics that they think are so awesome actually came from the Jewish Bible.  Bob Marley was a great lyricist because King David was a great lyricist!

Your most recent release, Thrillah, has a number of Israeli artists in the band. How did that come about?

I’ve been to Israel, back and forth many times over the past decade, even having lived there a year at a time, and  spent a lot of time in their music scene. Always loved it’s vibes. So with this album, I spent time trying to switch things up. We ended up bringing five Israelis into the project. Our bassist, Yossi Fine is half-Israeli/half-Caribbean, and a major producer in Israel. Shlomi Alon, on saxophone, is from Funk’n’stein, and Hadag Nachash, one of the most popular groups there, along with bandmates Yair Slutzki on trombone (also from Hadag Nachash and Funk’n’stein), and Sefi Zisling on trumpet (Funk’n’stein), and Gavriel Friesem on percussion (from Rasta Power, whose album I co-produced).

Is there a big reggae scene in Israel?

There are some West Indians in Israel who are definitely some of the cornerstones of the scene. The reason I think it works there is that Jewish people, especially Israelis, know more about the iconography and connection of Rastafari and Jewish culture. It’s a really vibrant scene. Twenty years ago it definitely was not; now, everything is represented. More dancehall, more early ’70s roots, a more comprehensive selection. More ska sound-systems. Some sound-systems are playing songs released in Jamaica in the last week, not always dependent on getting 45s. The magic of the Internet.

Have you ever been surprised by a reggae scene in another country?

I’ve never been anywhere there isn’t reggae going on and it’s not surprising. Big differences depend on whether there is a sizable West Indian pop scene. The UK has a different vibe. Doing a show in Birmingham is like doing a show in Brooklyn or Miami. It’s the same for anywhere outside of Jamaica that has a large Jamaican community.The unifying thing about scenes everywhere are good, mellow vibes. Possibly ‘cause of herb smoking. People adopt Rastafari. There are Thai Rastas, and ones in Moscow. Then there are people who just love reggae, good music, peace and love vibes, and have a reverence for Marley and other reggae artists.

What’s your favorite cut off the record, and where in the world are the Easy Star All-Stars set to tour for Thrillah?

“Lady in My Life,” the last song on the album, is my favorite on the original and on our version. It just always spoke to me. We’ll be touring the US most of the fall and in the UK in November. Then Mexico, Guatemala and Brazil in 2013. Every year we basically play all over Europe and parts of Asia.We’ve never played in Jamaica, but I’ve DJ’d in Jamaica…to a few hundred white people on a resort! We haven’t played, understandably, since most non-Jamaican reggae acts haven’t played there. We’re an American band with Jamaicans in the band.