Yesterday, the U.S. Senate confirmation hearings for Supreme Court nominee Elena Kagan took a slight digression from the usual politically relevant inquiries (Is she a pinko Commie? Would she support a military full of flaming queers? Et cetera.) Rather, in a bizarre and probably anti-Semitic departure from legalese, Senator Lindsey Graham (R-South Carolina) demanded to know where Kagan was last Christmas. To which Kagan responded with remarkable agility: “Like all Jews, I was probably at a Chinese restaurant.”

Kagan is certainly commendable for her outstanding display of wit and Judaism in the face of the American Right, but it is our moral duty to inform the public that her statement is simply untrue. She was not at a Chinese restaurant on Christmas Day; she was, in fact, attending our annual Heebonism bash, where she partook in strip dreidel with Heeb’s porny friends, Joanna Angel and James Deen. Here’s proof. 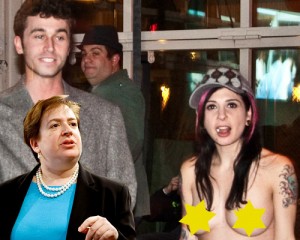