With his giant democratic balls, Representative Anthony Weiner has been slamming talk show host Glenn Beck — a man who makes most lefty politicians practically incontinent — for constantly frightening his fans into investing in gold with a shady, overpriced distributor. Though it’s 2010, Beck pushes for the return of the gold standard, telling his lower-middle class viewers that the shiny yellow metal is the only stable, profitable investment. If the Apocalypse comes, you can always chip away at your gold bars and barter away nuggets for goods and services.

The same distributor Beck endorses just so happens to be a sponsor of his show, prompting Weiner to ask if Beck constantly stoking fears about the economy isn’t a bit of a conflict of interest.

In return, Beck’s unleashed an all-out crusade against Weiner. Calling his allegations modern-day McCarthyism, Fox’s most emotional host has requested his fans send in “pictures of Congressman Weiner with his nose as a wiener.” And whatever else you might want to say about Beck, you can’t say he doesn’t have viewers (even at his lows, he beats all his competitors combined). Unafraid, Weiner’s ready to debate him one-on-one, even on Fox: “We should have some hot dogs, and some Becks beers, and we should, you know, have some fun.” 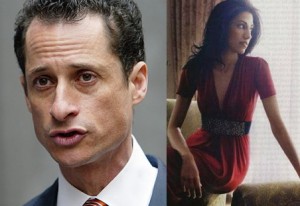 Yes, courage and character means a funny-looking Jew like Weiner can still score a hot chick like Huma Abedin

What is it with white collar Americans and gold anyway? Picture the future: Gold-crazed conquistadors and pirates roam the charred earth, and only smart Glenn Beck Show fans remain secure. They sit upon amassed piles of gold, eating ingots for lack of any other food and praying for the Second Coming of the Leprechauns.

Are You Invited to the Biggest Jewish Weddings of the Year?