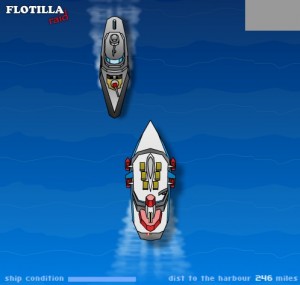 An online game developer has come out with “Flotilla Raid,” the latest in an increasing line of mid-east themed games that have been coming out in recent years. This one is highly simplistic, the player being tasked with maneuvering past bomb-shooting Israeli ships and helicopters in order to reach Gaza. Since the flotilla is filled with pacifists, players can’t operate any weapons against the impending enemy–it’s a circle-and-avoid kind of game. Think “Frogger,” only more political and less fun.

“Flotilla Raid” is, unfortunately, quite boring. Players must traverse 249 miles of water before reaching Gaza. Traveling at a rate of 15 miles per minute it therefore takes 16 and a half minutes to beat the game. Do you know how many knives could be sharpened and rocks thrown in 16 and a half minutes?