Texas: A Lot of Land, A Lot of Horses, Not a Lot of Jews 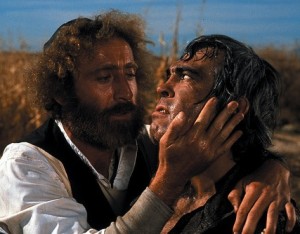 I grew up Jewish in a very non-gefilte fish eating part of Texas. It took us at least forty-five minutes to drive across town to temple, and if a Hasidic dude in black hat and coat strolled through my neighborhood I’m pretty certain the neighbors would have formed a militia.

I didn’t have it as bad as my dad with his black curly hair growing up in the 1960s, a lone snake-catching, horse-riding Jew in Fort Worth back before Fort Worth had fancy museums and vegan restaurants. Texas: a lot of land, a lot of horses, not a lot of Jews. My dad can read Hebrew as well as he can hunt deer and he eats pickled herring and baby back ribs with equal gusto. It’s funny to me that Bob Dylan and the Coen Brothers seem to have a desire to be Jewish cowboys. They should have a beer with my dad so he could learn ‘em a thing or two.

I remember when I found my dad’s high school yearbook as a young’un. I flipped through it expecting to see lighthearted notes like “Have a neat summer!” or “Math class was super!” Instead I found things like: “To the only Jew I like,” or: “You’re a dirty Jew but an OK golfer.” I was a very serious child, so when I saw this I marched dramatically into the den, where my dad was watching The Searchers for the zillionth time. John Wayne is his hero.

I shoved the yearbook in his face. “Dad! Did you see this?!” I was ready to grab picket signs and form my own militia. Dad scanned his yearbook notes and grinned. “Honey,” he said, stifling his smile when he saw the fury in my face, “It was a different time. They were my friends.” He went back to watching John Wayne rewrite the pronunciation of “Comanche.” I retreated with the heavy yearbook, totally confused.

Nowadays I’m much less serious, and the Texas side meshes pretty seamlessly with the Russian Jew side of my life. Rodeos and Purim carnivals aren’t as different as they seem.