Ten Commandments? Try One Million Of Them.

In the millennia since Moses climbed Mt. Sinai to talk to God (or, since a bunch of old men sat around a desert campfire and told cosmological stories to make sense of their confusing world — take your pick) the Ten Commandments have transformed from a simple code of conduct for a backwards tribe of ex-slaves to become the moral and theological underpinning of western civilization. But here in the 21st century, life has gotten much more complicated than those desert-dewlling days. Perhaps it’s time to augment our commandment repertoire with help from the prophets of our time – rappers on Twitter.

Enter One Million Commandments, which collects the words of wisdom tweeted by rappers, artists and other notables, in an effort to create an updated codex of moral guidance for our exponentially complicated modern life. 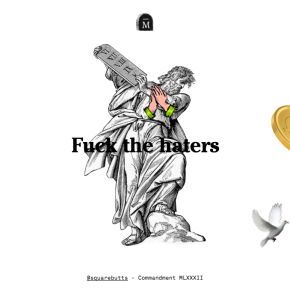 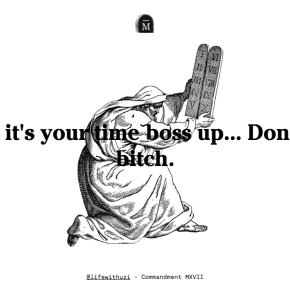 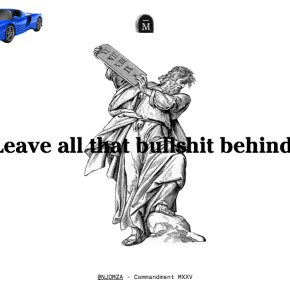 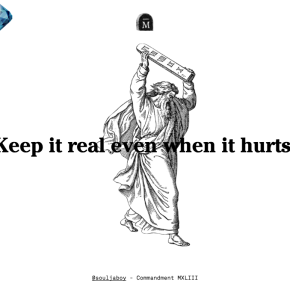 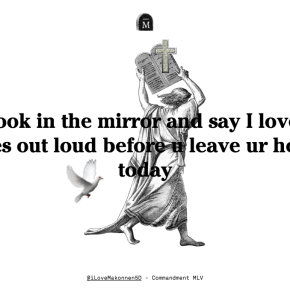 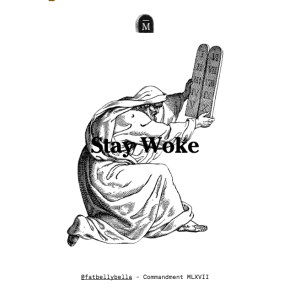 Rappers are way more important or relevant than television or politicians. We wanted to find a way to save all that wisdom and keep it all together because some of it is very clever, while some of it’s really funny. Hopefully we’ll make a book when we reach a million.

This isn’t Azcarate‘s first foray into world of hip-hop mash-ups. She’s also the brains behind the brilliant B4XVI tumblr, which highlights the “invisible conversation between hip hop and art before the 16th century” and (speaking from personal experience here) is a dangerously easy destination to lose an hour of your life clicking through.

One Million Commandments, meanwhile, is growing daily, so keep checking for more words of wisdom.

Like Moses at the mountain, this could be the start of something big.