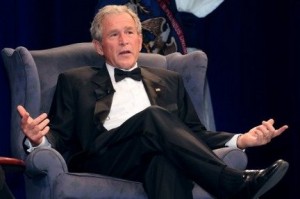 Sure, you don’t get to fly around in Air Force One anymore, but as an ex-president, you still get invited to all kinds of swank affairs that require you to play the international jet-setter. Or so it used to be.

George W. Bush was all set to traipse into Switzerland to serve as keynote speaker at a gala charity function, and maybe stock up on cheap Swatches, when word came down that if he showed up in der Schweiz, the locals might arrest him for human rights violations from back when he was chief warden at Guantanamo etc, leading the well-dressed waterboarder to cancel his appearance.  So why should Jewdar care? Because the charity in question was Keren ha-Yesod, the main fundraiser for Israel.

So to summarize–a WASP is accused of torturing Muslims, and it’s the Jews who get stiffed with the bill for the band and the buffet.