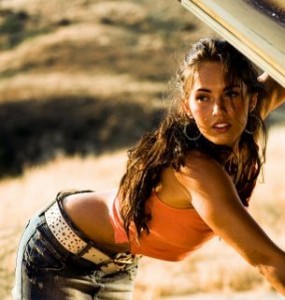 So here’s a dubious little nugget from professional ear-drum smasher Michael Bay over at GQ. By now most everyone knows that Megan Fox has been replaced in the latest Transformers “film”. The details of her non-return were apparently related to a tough working relationship with Bay. It’s all very hush hush and boring, so there’s no need re-hashing yesterday’s news.

What is new is Bay pawning off responsibility on Executive Producer Steven Spielberg. You see, back in 2009, Fox was fast becoming a hot star who wanted to be known as more than just a hot piece. She gave an interview to Wonderland Magazine and out of her mouth came: “He wants to be like Hitler on his sets, and he is.” Now, Bay opens up about her release from the franchise.

She was in a different world, on her BlackBerry. You gotta stay focused. And you know, the Hitler thing. Steven [Spielberg] said, “Fire her right now.”

While I do believe Spielberg wouldn’t go for a Nazi joke, it doesn’t really make much sense that it would send him over the edge and demand Michael Bay seek out some other barely legal actress. I love that he refers to it as “the Hitler thing” as if it were an international incident. I forgot about it until now, and I’m betting most of you are asleep this far into this article. So there you have it: if you want to avoid being in another shitty movie, just call Michael Bay Hitler and you’ll be free.