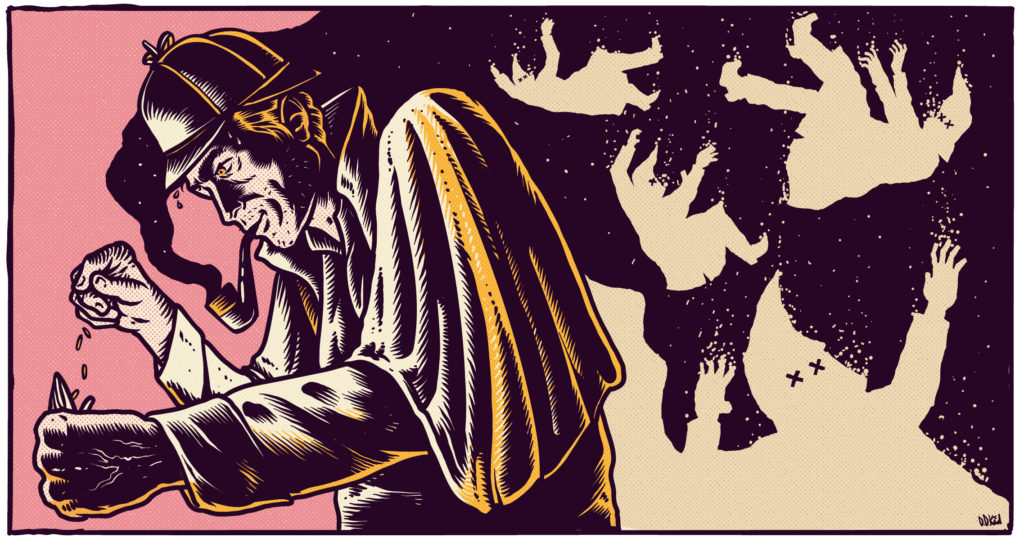 Sherlock Holmes has the kind of genius that the rest of us inferior beings (even Batman!) can only imagine. That’s why Sir Arthur Conan Doyle’s books never go out of print and that BBC “Sherlock” show keeps lingering in people’s Netflix queues. The dude’s just awesome.

Everyone’s favorite erudite detective/hopeless heroin addict even fought America’s least-favorite racists hundreds of years before the alt-right photoshopped its first meme. That’s right: Sherlock used magic to murder the KKK. Want to fight white nationalism in the 21st century? Just do what Sherlock did in Doyle’s 1891 short story, “The Five Orange Pips”: Lure the KKK onto a boat, then crash it with voodoo.

Late one stormy night, a man raps upon the door of 221B Baker Street. Sherlock immediately grasps the knock’s urgency and lets the visitor in because nothing gets past that dude.

The new client is John Openshaw, a stuffy English gentleman who lived with his bachelor uncle—a 1890’s failson supreme.

John explains that someone killed his uncle, Elias—a slimy American racist, Florida plantation owner, and former Confederate Army colonel. Elias moved back to England because of his “aversion to negroes” and their newly granted right to vote before he was mysteriously found dead. The guy seems like a real C.H.U.D., but John can’t figure out who’d want to kill him.

The only clue is a letter that was sent to Elias seven weeks before he died. It contained five orange seeds (called pips for some reason) and a politely worded death threat signed by “K.K.K.” John explains that the letter really freaked out his uncle:

“‘Opening it hurriedly, out there jumped five little dried orange pips, which pattered down upon his plate,” remembers John “I began to laugh at this, but the laugh was struck from my lips at the sight of his face. His lip had fallen, his eyes were protruding, his skin the colour of putty, and he glared at the envelope which he still held in his trembling hand, ‘K. K. K.!’ he shrieked, and then, ‘My God, my God, my sins have overtaken me!’

‘Death,’ said he, and rising from the table he retired to his room, leaving me palpitating with horror.”

At this point in the story, a contemporary reader might guess, “Could the assassins be the Ku Klux Klan? Nah, too silly.” But, in fact, it’s the very same KKK!  Why did they kill Openshaw’s uncle? Because Elias had tons of KKK membership papers, ledgers, and meeting logs—all the vital documents needed to run a hate group with an affinity for flamboyant costumes—locked in this trunk! He refused to return them, which led to the KKK’s downfall.

As it happens, the real KKK did fall around that time in history, but because of a different kind of paperwork snafu, i.e. a federal law.

It’s quaint to imagine now, but in 1891, the KKK seemed like a passing fad. Shortly after the Civil War, six Confederate generals organized roving mobs of angry racists to cause ruckuses and also pretend they were wizards. They thought of themselves as vigilantes, dedicated to striking fear in the hearts of anybody who wasn’t a cracker-ass motherfucker. It got really bad, so government officials drafted laws granting freedmen equal protection, making the KKK’s “antics” illegal.

Dressing like a Klansman got you sent to jail, so membership declined. Roaming bands of racists still kept lynching people, but they didn’t wear the stupid costume while they did it. The KKK didn’t “rise again” until 1915, when filmmaker D.W. Griffith directed The Birth of a Nation—the “neckbeard basement troll talking about skull shapes on Youtube” of black and white cinema.

The laws also gave freedmen (not to be confused with “Friedman”) the right to vote, and that’s why Elias Openshaw moved back to England and took all the KKK’s papers with him. So the KKK snuffed John’s uncle. Then they killed John’s dad, Joseph, because Joseph refused to put the KKK’s magic papers on a sundial at sunset (the KKK just loves corny magic!).

Sherlock deduces a rational way to solve the problem: destroy the papers and leave a note on the sundial. That way, you don’t help the KKK, and they’ll hopefully leave you alone. This ends up being shitty advice because the KKK isn’t a rational organization so much as a group of angry racists who like to dress up like ghosts.

John runs home to burn the documents, and Sherlock pulls out his American encyclopedia—1891’s equivalent of uh…Google?—and looks up “K.” Then he figures out it’s the Klan in like, two seconds, realizes all the KKK’s letters were sent from boats, and snorts a fuck-ton of cocaine (implied) so he can check the passenger logs for every boat coming to England and figure out when these racists will land on Her Majesty’s Treasured Isles.

Unfortunately, the KKK already beat Sherlock there — they found John and pushed him off a bridge. His death is front page news, as smug little Watson is so happy to point out.

Sherlock has the last laugh though. He uses the port’s logs (most crimes can be solved with log-checks and cocaine) to find the name of the KKK’s ship, The Lone Star. He sends the captain some creepy orange seeds (this is a KKK “we’re gonna kill you,” message, apparently) and tells the cops to be on the lookout for the Klan’s ship.

All this detective work turns out to be completely irrelevant, because he later sees a newspaper article saying the ship sank and everyone aboard died. What a delightful coincidence! I like to think that Sherlock simply willed this into being by using the KKK’s own creepy-racist-magic against them.

So that’s how you beat racists.

Am I suggesting readers of this post go out and burn crosses on David Duke’s lawn? No, I am not suggesting that. But take a look at Sherlock Holmes stories. Maybe witnessing the deductive powers of history’s greatest detective will jog a solution to defeating our Orange Pip President.