Jewrotica.com announced its “Sexiest Rabbis of 2013” earlier this week and, as it promised back in October, leadership and activism are gussied up in innuendo click-bait. Nobody’s posed in a swimsuit, at least, but people are complaining that the cheap semantics–“Badass Factor”, “Getting Some Action”–cheapens the valuable work rabbis do.

Wall Street warriors are sexy because they yell and scream and make gobs of money. Physicians are sexy because they’re decisive and save lives. Use your imagination if you must, but qualities that determine sexiness should translate to where sexiness actually matters: in bed. What’s genuinely hot about the ordained are their attributes that make us hot.

Rabbis Do it Right

Rabbis Do it Better

A rabbi can show you how to earn mitzvah points for your orgasm, for Christ’s sake. I wasn’t paying attention when the method was explained to me before I got married—once the rabbi’s wife began referring to coitus non-interruptus as “putting the money in the bank,” my focus shifted to not laughing out loud. But mitzvah points apparently exist, and I bet they soften the blow of post-shag snoring.

Imagine your therapist delivering sermons to a rapt audience on weekends in addition to meeting with you privately during the week. For better or worse, personal empathy from a charismatic authority is hard to resist.

Bedding a rabbi sounds cool off the bat, like getting away with something really naughty in Hebrew school. But wait, there’s more: if your rabbi becomes famous (or infamous) (or winds up on a list of “Sexiest Rabbis”), you knew him when! Knew him, as in biblically. Although a rabbi will never be a rock star—there aren’t enough Jews in the world–a higher proportion of rabbis gain renown than musicians.

Go for it—you can’t be labeled a slut for sleeping with rabbis. 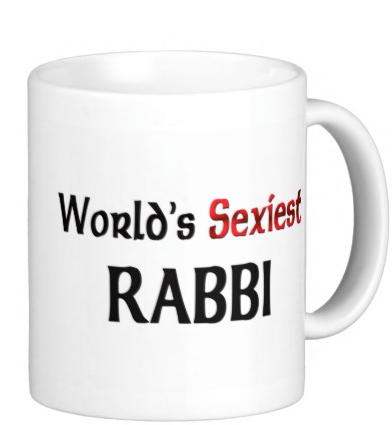 Oh God. Oh God. Oh…. what does a person scream in moments of ecstasy who won’t take God’s name in vain? Like all of life’s great mysteries, there’s no universal truth, only what you experience yourself. Should you be lucky enough to nail a rabbi, that is, or—maybe—to hear about the nailing of one from your best friend. The rest of us are in TMI territory, where we belong–who’s going to take a synagogue fundraiser seriously when they’re thinking, come on, oh gosh???

The flip side of that coin, of course, is an entire congregation wanting to bonk their pulpit-person and forming a cult. So, please, let’s acknowledge that the rabbinate can do sexy, and then let’s close the bedroom doors on this topic and drop it from public discourse.