Save Those Unborn Jewish Babies!

It is a well-known fact that the Jewish population is in decline, and to slow this trend, Israeli organization Efrat, like good Jews, are solving this complicated problem by throwing some cold hard cash at it.

Right at the top of their web page, a banner presents pictures of real-life children they’ve bribed into existence. Just imagine these kids spotting themselves twenty years later on the Efrat homepage. There will be Jewish versions of Tim Tebow all over.

An Efrat representative writes Heeb that their organization is "100 percent" pro-choice and pro-women. "If a person is truly pro-choice, they would want to offer to help the pregnant woman have her baby if that’s what her first choice is. That is what Efrat does." Perhaps, but check out this super-creepy certificate sent to donors: 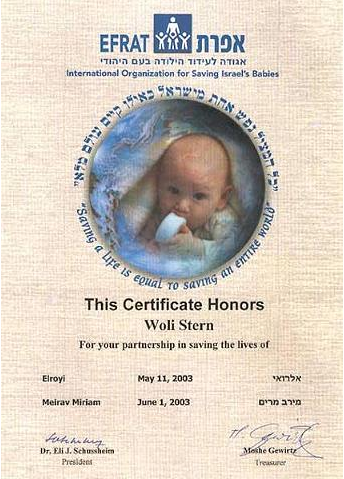 Yes, just write a check and you get the name and birthday of the kid you’ve "rescued."

Unlike the American Christian anti-abortion movement, Efrat smartly steers clear of the M-word. They stick to "save." They’re sure implying something, but "murder" never appears on the site.

This concept is common with many Israeli anti-abortion organizations such as Be’ad Chaim, a self-proclaimed pro-life group whose goal is to "end abortion-on-demand in Israel." Another called Just One Life insists they have no political agenda — they just want to help women continue their pregnancies. All three organizations get to skip the abortion debate by spouting lip service about saving unborn Jewish babies, either for the race or the state of Israel.

Since we all know raising kids costs practically nothing after they hit that first birthday, Efrat’s children are sure to lead successful, happy lives with their impoverished families. After all, the needs of the Jewish state come first, and all you need to contribute is your willing womb.