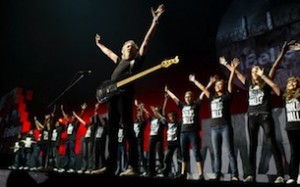 By now, EVERYONE knows about the ADL’s allegations that Waters hates Jews a little (like that’s a big deal these days). Foxman said this, and Rogers said that, but who is right? I’ll tell you who is right.

The other night I attended Roger Waters’ production of The Wall in its completion.   A journalist friend of mine was kind enough to bring me along–this was not the sort of thing I would pay for. Rumor had it our seats were $500 each. On Tuesday night, however, I discovered two things: The Wall is very, very long. And Roger Waters dresses like Brandon Lee in The Crow (yes, the wardrobe even included a leather trench coat).

But as far as the controversial Star of Davids which appeared on the ridiculously large video screens following imagery of dollar signs during the song “Good Bye Blue Sky”? Who noticed. Everyone was stoned. The entire audience in the Garden was practically hot-boxing. However, as a diligent journalist, I paid close attention and yes, red Ma’agen Davids do drop from the sky along with crucifixes, Islamic moons, and other religious and capitalist symbols, but this politicized Lucky Charms cereal (no Purple Hearts, sadly) was the least offensive thing about the night. What’s offensive is Waters’ incredibly naive and idealistic political platform. Look, I hate war just as much as the next guy that hates war a lot, but our world peace solutions cannot be found in a two-and-a-half hour concept album packed with anarchist-flavored ambiguity. Perhaps The Wall was Rogers’ attempt to stay relevant during the rise of punk in the late 70’s, but thirty years after the album was first released, the flashing imagery projected all throughout the night of war, fighter jets, victims, soldiers, people crying (and during “Young Lust,” a topless stripper) felt simplistic and manipulative. And besides, how can Israel, or as Rogers alleges, the occupation, take him seriously and make peace with the Palestinians when he cant’s even get along with David Gilmour? I’m just saying–one real Pink Floyd reunion and maybe we would have a two state solution.

[Incidentally, I had a very difficult time deciding on a title for this article. But the rejected options were “ADL Up Against the Wall,” or “Waters Comfortably Numb With ADL’s Accusation,” or “Hey You, Out There In the Cold Getting Anti-Semitic.” Just so you know.]