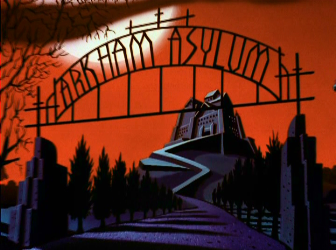 Jewdar recently had the pleasure of talking to Jenny Jaffe, the founder of Project UROK, an effort to try and use mass media and pop culture to help destigmatize mental illness for young people (NOTE:  “UROK” is pronounced “you are OK,” not “you rock).  Although as Jaffe freely admits, she is not a comics person, after meeting with Will Wheaton, she began to look at how comics present mental illness.

Batman is depressed but he uses his powers for good.   I’m a teenager and diagnosed with mental illness and I’m afraid I’m going to become a villain.  That’s what we need to change.  Any sort of struggle can be seen as a negative thing or seen as a superhero origin story…

Leaving aside the reference to Batman’s “powers,” (and she did say she wasn’t a comics person), she makes a pretty good point.  Lots of people struggle with mental illness, and most of them don’t go around trying to poison the water supply of major metropolitan areas.  Indeed, many of them go on to do some remarkable things.  Considering the kind of traumas that many heroes go through, whether as part of their origin story, or simply as part of their job, it would be both reasonable and realistic for more of them to be going through their own struggles with mental illness.  Case in point–Batman is a guy whose whole life and character is basically a struggle with the effects of childhood trauma (we forget who pointed it out, but while Superman is Clark Kent’s alter ego, Batman is the real person and Bruce Wayne is simply who he pretends to be when the costume is off).  While Jaffe sees some positive developments–such as Gail Simone’s run at Batgirl  where Barbara Gordon is coping with her trauma, there is definitely more to be done.

There is a particular poignancy in all of this right now.  Considering how many real-life heroes are coping with PTSD–and with their own sense of shame and failure at having to do so when they grew up in a world where their heroes never have such problems–it would be a wonderful thing if the current generation of comic book readers grew up in a world in which mental illness doesn’t prevent ordinary people from doing extraordinary things, nor does the ability to do those things mean that you are immune from mental illness.

But we’ll give the last word to Jaffe:

I think the actual thing that needs to happen is for a superhero to have a diagnosable problem as part of his back story, and even for villains to have some real problem as opposed to just being “crazy.

Speaking as a long time comic nerd in good standing, Jewdar would be happy to see that too.

Jenny Jaffe will be appearing on a panel in New York Comic Con, “A Force for Good:  The Powerful Partnership Between Mental Health and Pop Culture” on Sunday, October 11, from 3:45-4:45.