Philip Roth Wins Man Booker Despite Sitting on Our Faces

Not all of the judges agreed. One, Carmen Callil, the founder of the feminist publishing house Virago, stormily withdrew from the panel over the decision to honor Mr. Roth, telling The Guardian newspaper that he “goes on and on and on about the same subject in almost every book,” adding, “It’s as though he’s sitting on your face and you can’t breathe.” 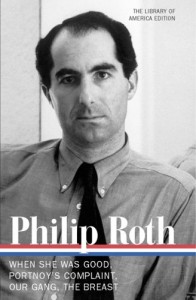 Out with it: there’s too many nebbishy, womanizing Jews in his books, right Carmen? Let’s not pussyfoot around and declaim Roth as not even being a writer when clearly, clearly he has proven himself to be an American master of arts and letters.

Perhaps the issue is that someone of his stature doesn’t need another award on his shelf, and that’s a valid argument. John le Carré, for example, withdraw his name from consideration so that a less well-known author might take home the gold. I don’t buy into the argument that Roth is a one-trick pony. Exhibit A: The Plot Against America. If anything, I would say boiling him down to a stereotype proves a non-understanding of his body of work.

Anyway, reading Portnoy’s Complaint at an impressionable age has had a lasting effect on me (duh, look where you’re reading this). Plus, his films gave us the celebrated career of Richard Benjamin, who pulled a Jewish double-whammy as Goodbye Columbus’s Neil Klugman in 1969 and the chronic masturbator Alexander Portnoy in 1972. If that doesn’t deserve international recognition, I don’t know what does.

Congratulations, Philip! I can’t wait to read however many novels you have left in you.