Nick Merrill: How Ethel Rosenberg Made Me An Internet Privacy Hero 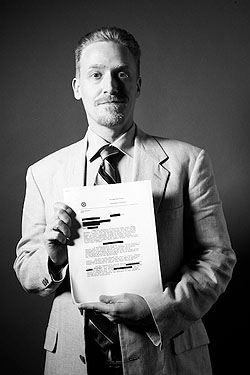 The scene: A federal agent hands you an envelope containing a letter. The agent waits for you to open it; clearly you are expected to do so immediately. Contained in the letter is a request for a private citizen’s internet use information, including email addresses (to and from), phone numbers, and transactional records, for a national-security-related investigation. Oh, and your gag order begins the moment your eyes flicker across the page; no one can know that you even received the very letter in your hands.

This was the exact situation facing Nick Merrill in 2004 when he was served with a National Security Letter (NSL), a form of subpoena used by the FBI, the CIA, and other federal agencies that require no probable cause or judicial oversight. Nick was in the unique position of being an individual business owner with a deeply ingrained appreciation for civil liberties and thus refused to use his access to proprietary information to violate a client’s right to privacy. Instead he filed a lawsuit with the ACLU (Doe v. Ashcroft > Gonzales > Mukasey > Holder), which ruled NSLs unconstitutional on the basis of separation of powers in 2004, and in 2008, found the gag orders contained in them to be a violation of the First Amendment.

After seven and a half years under a gag order, Nick’s lawsuit concluded with a settlement that mostly prevents him from revealing the vast majority of his case’s details. Fortunately, the settlement does allow him to reveal his identity, and to spearhead an effort to change telecom industry practices to favor customer privacy over government intrusion. He was also able to personally accept the ACLU’s Roger Baldwin Medal of Liberty, the organization’s highest honor.

A year after emerging from court-ordered silence, Nick has established the Calyx Institute, a nonprofit telecommunications provider thats goal is to lead the industry in best practices for protecting customer privacy. I sat down with Nick the week leading up to the official launch for the Calyx Institute.

What went through your mind when you got that letter?

I thought there was no way I could cooperate with this. I’m an American, and I always have the right to talk to a lawyer so that’s what I did. Remember that this was 2004, the drumbeats of war were rising, we were about to invade Iraq, and I was terrified that as a country we were abandoning the rule of law.

Why did you decide to take a stand? It was pretty bold to bring forth this suit on your own.

I have an interesting combination of family influences – my father’s family is sort of Eisenhower Republican, he very much believes in the system, in checks and balances and the rule of law.

So I have a combination of idealism about what the system should be, whom it should protect, and an awareness of how drastically wrong that can go. It can go in the opposite direction.

How prevalent is the issue of NSLs? Has the change in presidential administrations changed anything?

The Department of Justice Inspector General audited the NSL practice and found that within three years (2003-2006) about 200,000 were sent out, which works out to one per 1,500 Americans.

There’s no way that one out of every 1,500 Americans is a national security risk or suspected of treason. I believe that scope of letters represents a massive fishing expedition, and to a certain extent I don’t blame the agencies who use them so widely, because they also have to live with the question, “Did we do all we could?” Only in their case it’s about preventing a terrorist attack.

But no, the administration hasn’t changed much, because an attorney for the FBI found that the current number of NSLs sent is greater than ever before. And either way, the principle is the same. Political context is sort of irrelevant.

Who are your allies? Have you been surprised about who is and is not supportive of your cause of Internet privacy?

When I brought the suit forth, I expected the telecom industry to bring their support to bear, but the cavalry never arrived. I found that major companies were just complying and giving the FBI and NSA total access to customer data when it was requested, sometimes more than the Feds were asking for. This is even with their in-house counsels telling them this is unconstitutional, a violation of federal law regarding privacy. And I think within that is the issue of profit motive, and not wanting to be at risk of losing government contracts, among other things. However, I have a standing invitation to speak at Google about privacy issues, as well as speaking engagements with communications industry trade associations and academic institutions.

What will the Calyx Institute do, and what do you hope to accomplish as a not-for-profit?

First of all, we will provide communications services—Internet and telephone, possibly mobile phone service, with a focus on protecting customer privacy and establishing best practices for the industry. As a nonprofit we don’t have the same profit motive and can set an example. Even if we capture one percent of the market, we can show the industry that there is a consumer base for privacy. No moral argument will sway them, only a fiscal case.

Second, we would like to create a test bank for designs and systems that set the benchmark for ways to protect customer data. [Finally] we would also issue white papers on policies and the state of the industry.

With social media, we already share a lot of our lives online, and sometimes other people’s too, through something as innocuous as tagging. If we voluntarily participate in a surveillance culture, what does that mean for advocates of privacy and civil liberties like yourself?

You do see Facebook coming under a lot of criticism for inadequate privacy protections, so people are somewhat aware of the issue. It’s not that I’m not concerned about the erosion of privacy through social media, it’s just that it has to be shared by choice. The government coercion in things like NSLs means my information can be accessed without my knowledge or consent.