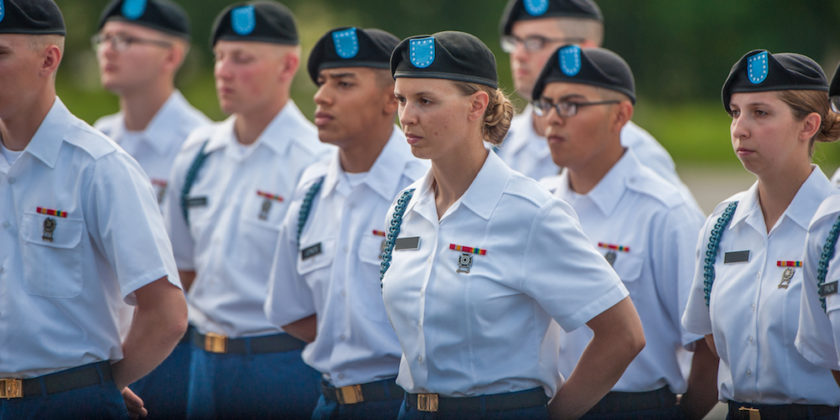 Jewdar had long been an advocate for allowing gays to serve openly in the military, based on the very simple premise that as someone who loves the army, we

A.  Want every American to be able to serve their country to the best of their ability

B.  Believe that our army and our country lose out when good troops are kicked out for bad reasons.  And sexuality is a pretty bad reason.

We are a afraid to say, however, that when it came to allowing women in combat arms, we were a bit more hesitant.  We weren’t opposed to it, per se, but we were also not behind it, either.  The issue was not whether or not women could fight–many women served in combat in the Red Army during WWII.  Our objections were far more mundane.

A.  Would women be held to the same standards as male infantry soldiers?  This is not an unreasonable question.  One of the things, to our mind, that made integration in the military work was that it created a place where white soldiers could see black soldiers doing the same jobs they were doing.  And the military, historically, has had different physical requirements for female soldiers.

B.  Girls have cooties, and there is a legitimate concern that, in a combat situation, you could have  cootie pandemic, much like Spanish flu at the end of WWI.

In other words, there wasn’t a really good reason, other than it was different, and would take some adjusting.  But when Jewdar read that the military had opened up combat arms to women, we were glad, and having just read about the graduation of the first class of infantry soldiers with female recruits, we were delighted, both for them, and our old alma mater (though to be clear, while they did graduate from the Infantry School at Ft. Benning, they were in the Sand Hilton, not Harmony Church, where the real infantry soldiers were trained before they switched it to the Armor School).

Critics, of course, will argue that this is all just political correctness run wild, that the military should not be treated as laboratory for social experiments.  Jewdar agrees wholeheartedly.  But those critics have it completely wrong.   It is not admitting qualified troops who may be gay, or female, that places social concerns over military one; it is barring them.  The military is a fighting force–its purpose is to be so good at making war that in the best case scenario, it doesn’t have to, and in the worst case scenario, when it does, it wins. If these young women can do the job well, then they strengthen our military, and we shouldn’t place concerns about cooties above doing what’s best for the military.

As for the issues of integration and unit cohesion, there are, of course, legitimate concerns.  But here’s the thing–we never quite understood how people who claim to support the troops, and support the military, and talk about how we have the greatest military in the world, can have so little faith in our service men and women.  We expect our troops to accomplish difficult missions, and they do, every day.  Should we expect  that the same troops who can handle intense firefights, who can march for miles through the rain and the heat, who can pursue our nation’s enemies through jungles or deserts, can’t handle sharing a barracks with gays or women?

Jewdar, by contrast, believes in our troops, and believes that, just as when Jewdar served, we were able to bond by making racist jokes about one another, all the while understanding that in the army, we were all just shades of green, the soldiers of tomorrow will be able to bond over jokes about sexuality and gender.

And we mean that sincerely–at the end of the day, what matters most to soldiers is whether or not their fellow troops can do the job.  And we are certain that the average infantryman would rather share a fighting position with a hard-core female soldier than a male pogue* any day of the week.

So while Jewdar will not insult the most recent additions to our US Army Infantry by saluting them, we will say that we are so happy that they are able to fulfill their dreams to serve their country like Jewdar did, we thank them heartily for the service they are giving, and we offer our sincere prayers this Memorial Day that God keep them, and all our troops safe.

*Term for a soldier who doesn’t pull his weight.  The kind of thing you’d say about a guy who is always going on sick call when there’s a road march.  Has anti-gay origins, but nobody in the army uses it in the original sense.  “Pogeybait,” for example, is the junkfood that soldiers take out to the field rather than having to just eat MREs.  (for a good use of “pogeybait in the original sense, see James Jones’ excellent war novel–turned into a terrible movie-–The Thin Red Line.)