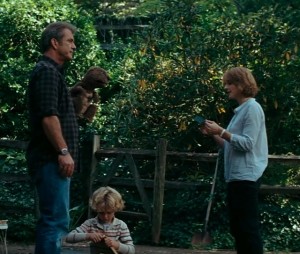 Believe it or not, the original script for The Beaver was sheer dark comedy brilliance. It made that year’s Black List – basically a (slightly rigged) yearly list of the best unproduced scripts in Hollywood. I read it as a development exec a while back, we all adored it, and it wound up on our CEO’s white board under the optimistic column: “Possible Projects.” On paper, The Beaver had an American Beauty meets American Psycho feel. The main character even cut his own arm off when the puppet started to take over his personality (this predated 127 Hours, but wouldn’t that have been a neat double feature?). As per usual with the development process in Hollywood, the arm cutting got… lopped off… to make it more palatable for the masses.

Jim Carrey was attached to play Walter the puppet man and things seemed to be on the right track. If only someone like Spike Jonze jumped on board to direct, we could all be watching a swoon-inducing trailer, a la Eternal Sunshine. Alas. Jim Carrey went on his merry way, and the ever-serious Jody Foster grabbed the reins as director.

Seems like Jodie Foster maybe thought she could turn out a meaningful, metaphorical, super deep character study that could resuscitate her good buddy Mel’s image. Watching the trailer, looks to me like Foster and Gibson managed to dilute and ruin a solid piece of material.

Now, it’s possible that The Beaver could be an incredible film. We could all be watching Mel a year from now on stage at the Oscars, teary eyed and apologizing for his bad behavior towards women and The Chosen People. Never say never.

For now, I’m on the side of the son in this mess of a movie trailer. Especially when he asks, “This is a joke, right?” That’s a very good question.