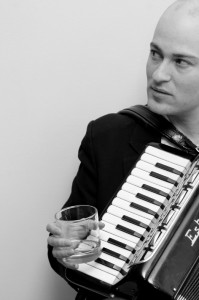 Disillusioned, guilt-wracked Jews searching for an anthem of their own need look no further than Canadian singer-songwriter Geoff Berner’s “Lucky God Damn Jew,” a klezmer track that’s as much about being resigned to your Jewish identity as it is about embracing it. With sardonic lyrics and maniacal, sprawling vocals, it’s a fun drinking song with bitter undertones likely to resonate with unsettled Jews of today.

In fact, the song seems to have struck a chord with one ostensibly Arabic Youtuber who posted an “unofficial video” interpretation, juxtaposing the song with footage of Jews dancing the Hora, starving and dead Jews in concentration camps and persecution of Arabs in Israel, in that order. It’s not clear if the video attempts to educate Jews about the brutality of the Palestinian occupation by equating it to the Holocaust, or if it’s just preaching to the anti-Israel choir. Either way, it’s worth a look:

We spoke to Geoff Berner about his thoughts on the “fan” video, as well as the inspiration behind “Lucky God Damn Jew.”

Tell us about your song. Are you trying to say that you in particular are lucky, or do you mean that the Jews are just lucky to still be here?
It’s supposed to convey the mixed emotions that swirl around when I reflect upon…partly my own sense of fortune in my life, and the Jewish people as well. [It’s] a reflection of not just Israeli politics, but Canadian and American politics. And the fact that, like, sometime around 1972, Jews became accepted as 100 percent white people in North America. You know, it was something we struggled to achieve. And now that we have achieved it, there is an ambivalence about it.

What’d you think of the “fan” video?
I thought it was pretty heavy handed, and sort of looked like it was made by somebody who had just found out about the Occupation. And they were about 19 or something like that. And they were like, “Oh, this is bad! This is wrong!” Overall, I think it’s wonderful that I would inspire the project of undergraduate art students, so overall, I’m pleased with it. But the whole thing is hugely simplistic.

However un-artful it may be, is it fair to say that it captures one of the messages of your song?

Yeah, I totally understand how somebody would infer that. I mean, I didn’t just mean Israel when I said that “I live in a country where I am free to persecute people with less luck than me.” I don’t make any ethical or political distinction between the Israelis in their Occupation, and the general behavior of the Canadian and U.S. governments toward their indigenous people. It’s sort of a depressing thought, but one of the major things that the song is supposed to convey is the sad fact that suffering does not ennoble most people. When we were taught in Hebrew school the whole “Never Again” thing, was it “Never Again” genocide, or “Never Again” to us?

I tried to make a complex, nuanced, mixed emotions song, and the video is pretty straightforward anti-Occupation. And that’s okay with me. But I was trying to put a bit more into the song. And if we’re not going to give any money, ever, to Israel until there’s justice, it’s kind of like, “Oh, wow, who are we gonna give the money to then?” (laughs) Point me towards the country that has [always] provided justice for its downtrodden, and we’ll give the money to them. I mean, it’s patently ludicrous, given the human condition. But I’m still—as the English would say, I’m still chuffed that someone would go to the trouble.

How much do your politics factor into your music?
All art has some political perspective, comes from some point of view or other. The music of American Idol and Taylor Swift or Toby Keith, and the mainstream of world pop, is essentially a right-wing perspective. Just the format of the Idol shows is fundamentally right-wing: that the world is divided into winners and losers, and there can only be so many winners, and the losers are there to be humiliated so that the winners can feel more win-ey. It’s a division of the world into the strong and the weak.

Also, a lot of the stuff that comes out now is a kind of…indie rock-thing, where the lyrics are secondary or tertiary to the mood and the vibe, and they lyrics tend to be mixed low, and difficult to really tell what they’re on about at all. And I don’t think that’s accidental. I think that, unconsciously or consciously, there’s a deliberate kind of cowardice to that of ambiguity.

Are you prepared to defend everything that’s in your music?
Sure, absolutely. I mean, I’m sure that I’ve messed up from time to time, but you put it out there, and…what you do is who you are. That’s a very Jewish idea.

“Lucky God Damn Jew” from Geoff Berner’s album Whiskey Rabbi is available for download off iTunes. Check out his Myspace and his website.